A Year of Animation: Oh Canada!!

So I've got this idea for a silhouette animation, but I'm having trouble getting it off the ground. Well, sometimes you need to just dive right in and do some experimentation to get the project moving forward -- priming the pump as it were. 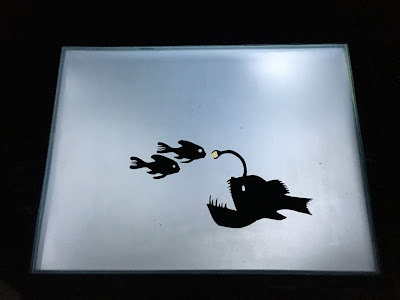 In this case, since I was going to be in Toronto for a couple days before attending the Ottawa International Animation Festival, I rented out the "Lotte Reiniger Studio" at the Toronto Animated Image Society for the day in order to play around and get a feel for this animation -- and draw a little inspiration from Lotte's tricktable.

That day, I went through six tests, animating the same scene over and over until I reached this one:

A lot of what I was looking for was getting a feel for how long the scene should be, what frame rate I should film the scene at, whether this should be filmed on ones, twos or threes, and how fast or slow the fish should move. After doing these tests, and taking lots of photo and video references at the Toronto Zoo and Ripley's Aquarium, while I'm not ready to animate just yet, I'm definitely ready to finalize my storyboards and move to the animatic phase of my production.

Labels: A Year of Animation

As seen in my last post, we held our annual ASIFA Central members retreat in August. Not wanting to miss an opportunity to work on my public speaking skills, I volunteered to give a short presentation on Lotte Reiniger. But rather than offering the same lecture that I had for Women's History Month, I decided to revisit and recycle a portion of that work while adding new information that I don't see any other researchers focusing on.

Much has been said about Lotte's animation work. However, rarely meriting more than a mention or a footnote in books and articles written about Lotte is that around 1918 to 1919 she created 'silhouette' illustrations for a book of German poetry written by Gustav Hochstetter titled Venus in Seide: Ein neues Liebesbrevier (Venus in Silk: A Breviary on New Love), published in 1919.

Hochstetter himself, was an author, poet, humorist, and professor of Jewish-German origin. During his lifetime, he wrote over twenty books, of which, Venus in Silk was one. Tragically, Gustav Hochstetter would be swept up by the Nazi's in World War II. He was deported from Berlin to the Radinkendorf labor camp in Poland and then, on October 3rd, 1942, sent to the Thereisenstadt ghetto in German-occupied Czechosloakia. Gustav Hochstetter would die a year-and-a-half later at the age of 70.


After coming across his name (and the title Venus in Seide) while reading Whitney Grace's book Lotte Reiniger: Pioneer of Film Animation, I did a little digging into the history of Hochstetter. Confident that he was a part of Lotte's history that needed to be told, I then tracked down a first-edition copy of Venus in Seide at a bookseller in Germany -- Chiemgauer Internet Antiquariat, owned by Frauke Strassberger. About a week later, a weathered, well read book arrived in the mail.

Then came the difficult part.

Researching Hochstetter wasn't too bad. There's enough information about him on the internet to pull together a couple slides about his life. The tough part was translating portions of Venus in Seide! However, between my next-to-useless two years of college German and my fluency in Google Translate, I was able to cobble together several complete poems in addition to captions for Lotte's illustrations.

My initial plan was to show Lotte's silhouette illustrations in my slides and perform an analysis of her static models for print compared to her dynamic models designed for animation, but I quickly became swept up in the excitement of translating Gustav's poems. What first was an attempt to put Lotte's illustrations into their proper context rapidly became a welcome obsession as I tried to get into Lotte's mind, imagining what this young woman must have been thinking when translating the printed word into an illustration designed to accentuate the poem yet showcase it's own sense of beauty without detracting from the richness of the printed word upon which it was based.

The following is one of my favorite poems (from the few that I've translated thus far). You can see Lotte's silhouette illustration on the right side; I recommend looking back at it from time to time as you read Hochstetter's poem. I'm sure you will notice, as I did, how well Lotte's illustration accentuates and reflects Gustav's words and that Gustav's words (in turn) accentuate Lotte's illustration -- especially since Gustav's poem speaks of features that you cannot observe in a black-and-white silhouette.
﻿﻿

Now, if you go back and take a close look at the poem in the image above, you can see one of the main difficulties in translation. The font used was this flowing, artistic typeface that obscured some letters, like the 'tsch' or 'sch' consonants. Additionally, the 'S' had at least two separate and distinct forms depending on whether they were capitalized or in lower-case. A magnifying glass was a most helpful tool as I deciphered the individual characters, typed them into Word (making liberal use of their German symbol library), then copied the poem into Google Translate and waited for the English result.

Google Translate itself is an odd bird. After using it to translate portions of several poems, I quickly learned that the algorithms appear to translate many of the words based in part on the context of the sentence -- which can be both helpful at times and very frustrating in others. More than once, I broke down a sentence into it's component words and looked through various definitions in order to translate the sentence into something that was both coherent in English AND maintained the spirit of the poem in its overall context. For someone who loves working on puzzles, I often found myself wishing for more time to translate just "one more poem" before the presentation (and also for a friend who could check my German to English translations).

When paging through this old text, it was very apparent that even at this young age, Lotte Reiniger had developed a skilled eye in creating very clear, very 'readable' poses for her characters as well as the ability to maintain proper proportions for her characters when cutting them from paper. One can only imagine the delight Hochstetter must have felt when Lotte agreed to create the illustrations for his book.

On the day this blog post goes live, coincidentally on Yom Kippur, it has been ninety-nine years since Hochstetter first published his book. I can't even fathom what must have been going through his mind as he lay on his deathbed, having been betrayed by his country and watched friends, family, and countrymen imprisoned and killed. But I think, I hope, that he would be pleased to know that there are people who are still reading his books and enjoying his poetry a century later.