Before I went to graduate school, I lived with my Grandmother and my Aunt for four months during the Spring of 1994. When an internship offer from a local company fell through, Grandma was gracious enough to let me exchange room and board for home repairs and grounds maintenance while I searched for a short-term job that would carry me until I left for graduate school in the Fall. After a day filled with chores and sending out résumés, most evenings would find me sitting in the living room where I watched movies or the occasional television show with my Aunt Dorothy. It was during one such evening that saw my first "Aardman Animation". We were watching the 1993 Academy Awards ceremony when a clip from 'The Wrong Trousers' was played. I sat there entranced by the two clips from 'Trousers' and replayed them over and over in my memory during the rest of the awards ceremony. Come what may, I put this short little film on my "must see" list.

It was my first Ottawa Festival experience. My classmates and I were at the festival for the weekend. We were sitting as a group in the balcony of the National Arts Centre, watching the Saturday night screening. The last competition film that night was 'The Wrong Trousers' and to say it was a crowd pleaser would be the understatement of the year. Each scene was filled with ingenious little visual puns as the master modelmakers at Aardman had created an entire universe appropriate to the characters. And at the climax of the film, the entire theatre roared with laughter and applause when Gromit grabbed the box of train tracks and built a new track in order to prevent he and Wallace from being derailed by the penguin.

Thus began my love for the films of Nick Park, and by extension, Aardman Animations. In the years since, I've tracked down Nick Park's 'A Grand Day Out' as well as the original 'Creature Comforts', watched some of the more obscure Aardman films like 'Adam', watched selected episodes of the 'Creature Comforts' t.v. series and 'Shaun the Sheep', and delighted to Aardman's feature length movies: 'Chicken Run', 'Curse of the Were-Rabbit' and 'Flushed Away'. I've even had the pleasure of visiting the Wallace and Gromit museum exhibit at M.I.T. around the time of the warehouse fire that consumed the rest of the Wallace and Gromit models and set pieces. Aardman reintroduced me to a world of stop-motion film that included everything from plasticine models to pixilation. To this day, I still cheer from the sidelines when Aardman breaks world records like the smallest and largest stop-motion animations produced to date. The largest animation being their short film 'Gulp', which can be viewed below.

And don't forget to watch the making of the film: 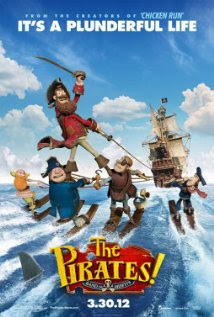 You can imagine then, my profound sense of disappointment this weekend as I sat through their latest film 'The Pirates! Band of Misfits'.

All the elements from Aardman's previous works were there: experienced voice actors, consistent character design and animation, a believable world filled with visual puns and gags, and a good selection of music that accentuated the emotional tone of the scenes, but it was that little spark of life that was missing. The story and dialogue just weren't up to the usual standard for an Aardman Animations film. This movie had the feel of a half-hour show that was stretched into an hour-and-a-half. I think what hit me hardest was the cardboard cut-out nature of the secondary characters. The Pirate Captain's crew members had no motivation, nothing to do, and no real reason to be there. From scene-to-scene, all they did was prop up the Captain for a few seconds and then fade right back into the background. Furthermore, the Queen's hatred for pirates was never explained. And the introduction of Charles Darwin almost halfway into the film stuck out like a sore thumb--although his chimp butler was very clever and did have some of the best gags in the film.

The only thing that I thought worthy of the Aardman moniker was the ingenious transition scenes where 2D characters sailed across an antique map, encountering trials and tribulations (and mermaids) on their way from place to place. They were cute and witty and left me looking forward to the next one whenever the main story started to drag.

Peter Lord has announced that a sequel to Pirates is in the works. I'm hoping that they will revisit what made the 'Wallace and Gromit' films (as well as 'Chicken Run') so successful and then apply those lessons/formulas to make Pirates 2 one of those rare examples where the sequel is even better than the original.

If I had to follow the Bill Plympton grading scale for feature length animated films (popularized on his blog "Scribble Junkies"), I'd say 'Pirates' was a B-/C+ -- a decent enough film for younger kids, but not enough to keep adults (or Aardman fanatics like myself) entertained for an hour-and-a-half.
Posted by Charles Wilson at 12:00 AM

Previous R.I.T. students who have won the Student Academy Awards are:


“The Walrus and the Carpenter” Thomas Gasek, Malcolm G. Spaull
A poem written by Lewis Carroll portraying human qualities in a rather witty way. The film follows closely to the poem.

Posted by Charles Wilson at 9:52 AM No comments:

Since ASIFA/East's 43rd Annual Animation Festival was last weekend, here's the signal film for those of us who couldn't make it out to New York.

This cute little film was created by a pair of animators who graduated from SVA's animation program: Chris Conforti from Square Footage Films (you may remember his film 'Frog' on the second Avoid Eye Contact DVD) and Kristen Chiappone (also a fellow Blogspot user). As the Kalamazoo Animation Festival International is on hiatus, it's great to see fellow ASIFA chapters holding their own animation festivals. While KAFI wasn't an ASIFA produced festival, per se, we did do our best to help out by running lectures and workshops for their attendees. Judging by their signal film, ASIFA/East continues to raise the bar for the rest of us. Hopefully, sometime soon, we here at ASIFA/Central will be able to hold our own screening night as we wait patiently for KAFI to come back to life.
Posted by Charles Wilson at 12:00 AM

Okay, it may not be animation, but it does have an animation character in it. This video was just too cool not to share.