This past weekend, I had the opportunity to see Wolfwalkers, the new film from Ireland's Cartoon Saloon. 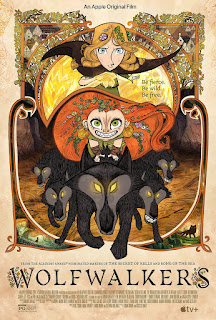 It's been a while since I've seen a movie in the theater--so long in fact that I don't even remember what the last one was... Weathering With You down in Ann Arbor, maybe? It was back in March I think, right before the lockdown. Anyways, about two Summers ago, I had saved up enough money to buy a nice larger-format-screen television with a speaker bar and hadn't gone to theaters much since then.

Nowadays, the theater experience isn't one that I look forward to what with people talking on their phones (or to each other) and the high prices that theaters charge for tickets and concessions. But, there are some films worth braving the crowds for and they're usually films that GKIDS brings to the theaters, in this case through Fathom Events. So I went online and bought my ticket, then drove to the Celebration Cinema theater on a blustery Sunday afternoon. Turns out, out of all the people in my city, I was the only person who came to the theater that day to see this film. Their loss.

Some random thoughts I had while walking to my car afterwards:

All-in-all, this film is another solid performance for Cartoon Saloon and directors Tomm Moore and Ross Stewart as well as producers Nora Twomey, Paul Young, and Stéphan Roelants. And while I didn't like it as much as I did Brendan and the Secret of Kells, it was still an enjoyable film that showcases the massive animation talent that is working today in Ireland, Belgium, and France.

* images used from the GKIDS Presskit.

Posted by Charles Wilson at 12:00 AM No comments:

"The way to get started is to quit talking and begin doing."