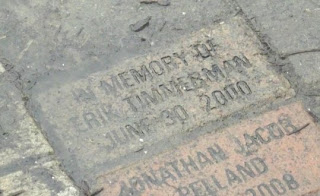 Erik had a quirky sense of humor that I didn't always get at first...

When I started at graduate school, money was tight--like so tight that I couldn't afford to get a hair cut during those first couple weeks of classes. I had saved money over the past few months but it was only enough to get me out to Rochester and cover rent for the first month or two with some left over for gas and food. Until I found a part-time job, things like hair cuts were a luxury that I couldn't afford.

At that time, I had taken to wearing a bandana and a backwards-facing baseball cap with the Apple Computers logo that my sister and brother-in-law had given me--their not-too-subtle way of poking fun at the fact that I owned a PC. But, between the bandana and the cap, it kept my often unruly hair in check while I worked and waited for that first paycheck to come in, thus allowing me to retire the cap and return to my usual part-on-the-side-square-the-back 'Rock Hudson' haircut.

So, one day, Erik walked into our Graduate Seminar class, took one look at me and asked me if I bought my hat that way? Looking back on it, the implication was that the cap was designed and sewn to be worn backwards as opposed to just buying a standard baseball cap and wearing it backwards. At the time, I didn't get it...

A year later, I had gotten used to Erik's sense of humor and even reached the point where I could pull one over on him... not often, mind you, but it did happen from time-to-time. Like when we were walking away from his office and he made a self-deprecating joke about his "middle-aged-Dad's" tummy. Uncomfortable with making a joke at the expense of an authority figure, much less someone I liked and respected, I immediately quipped "Well Erik, all this time I just assumed that you were storing up for the nuclear winter."

He laughed, I laughed, and we continued down the hall.


I saw The Prophet at the Detroit Institute of Arts earlier tonight, and it was time well spent.

While the meta-story that tied all the individual animation "chapter" sequences together didn't break any new ground (and parts of it felt like they were copied from another GKIDS import: A Cat in Paris as well as pulling elements from Disney's Aladdin), it was executed competently and was an entertaining enough way to stitch the chapter sequences together. The voice acting was well performed. And though I did have some difficultly following Liam Neeson's reading of the lead character 'Mustafa' (the DIA showed this film outside on a very windy evening), inside a theater, his rich baritone voice should come through clearly and provide the nuances to Kahlil Gibran's poetry and prose that I was expecting to hear.

However, where this movie really shines is in the individually directed and animated segments that are based on, and in some cases include, the poetry of Gibran. All were very entertaining and you could easily pick out the individual animator's styles (Bill Plympton, Nina Paley, Tomm Moore, etc) as they visually interpreted Gibran's writing. All of the segment directors brought their individual artistic styles to their particular chapters, but they never felt out of place in the greater context of the story. The sequences and the meta-story all felt like they belonged together, so despite the fact that the transitions between chapter and meta-story were not always seamless, it never detracted from the film as a whole or from the visual unity of the film itself.

Now, despite the fact that I'm obviously biased--given my love for French Impressionist painting, paint-on-glass animation and clay painting animation--I still think that Joan C Gratz' sequence was the best. Her work in this film was simply breathtaking... oh, but it was incredibly difficult to choose a "favorite" sequence. I struggled mightily between Joan's chapter and Michal Socha's chapter, aptly titled "Freedom". I can't say enough good things about them: the animation in the chapters is just superb. They are clear examples of the best that both the worldwide and American independent animation scenes have to offer.

I look forward to seeing this film again in a much quieter venue where I can really concentrate on Gibran's poetry while I'm absorbing the lush visual storytelling of segment directors Nina Paley, Joan C. Gratz, Bill Plympton, Tomm Moore, Mohammed Saeed Harib, Joann Sfar, Gaëtan Brizzi and Paul Brizzi. If this film is not nominated for an Academy Award, then it'll be a worse decision than when the Academy snubbed Brazil's Rio 2096: A Story of Love and Fury (hey GKIDS? There's another film worth bringing to the States!).

Congratulations to producer Salma Hayek for bringing this beautiful project to fruition. 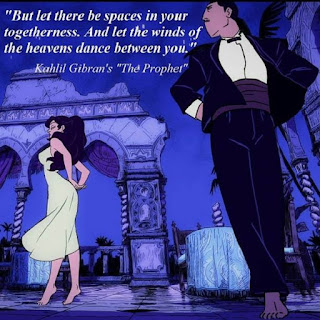 Any of my fellow Michiganders out there who don't want to wait until August (or later) to see this in the theaters? Fortunately for all of us, they'll be showing it in Ann Arbor at the Michigan theater on Saturday, June 13th at 10 a.m. If you can be there, don't miss it! This is a film you really want to see on the big screen.
Posted by Charles Wilson at 11:59 PM