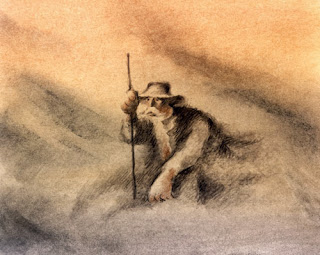 Canadian animator Frédéric Back died of cancer last night at the age of 89.

Watching Back's film "The Man Who Planted Trees" was a life-changing experience for me. I first saw this film at the Odeon Theatre in Frandor as part of the Tournee of Animation back in high school.

Having grown up on a steady diet of Disney, Warner Bros., anime, and the limited animation found in Saturday morning cartoons, I had never witnessed a film like his--one that immediately struck me as though I were watching an animated French impressionist painting. Even today, 25 years later, "The Man who Planted Trees" remains on the list of my top ten favorite animated films. The works of Frédéric Back forced me to push beyond my limited experiences and narrow vision of what an animated film was and led me down the road to embrace the works of Martine Chartrand, Stephanie Maxwell, and Patrick Jenkins many years later.

I hope that this coming year, the Ottawa International Animation Festival will plan a retrospective of Mr. Back's films so I can see them as they were meant to be seen: on a large screen where you can sit there and absorb every last detail. It would be a very nice way to close the chapter that opened with my seeing Mr. Back's film back in 1988.

Posted by Charles Wilson at 7:26 PM

Labels: Animated Thoughts, Frédéric Back, The Man Who Planted Trees

Here's one of those real crowd pleasers that we saw at this year's Ottawa International Animation Festival. It's a graduate film called "Wind", created by Robert Löbel at HAW Hamburg Department Design in Germany.

“People who are unable to motivate themselves must be content with mediocrity, no matter how impressive their other talents.”
~ Andrew Carnegie
Posted by Charles Wilson at 12:00 AM