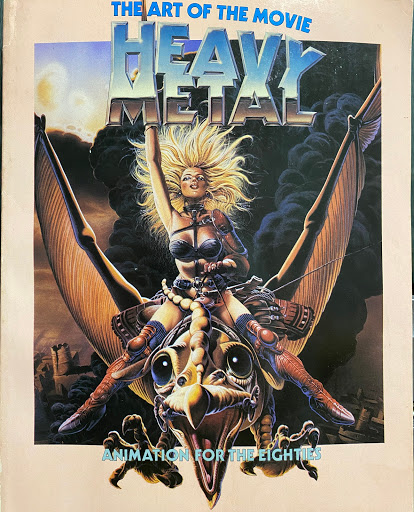 So last year, I tracked down a copy of 'the Art of the Movie Heavy Metal', the only book I am aware of that is dedicated to the production of the feature-length animated film Heavy Metal which was released in 1981. In my animation history class, I talk about the film and go into a little detail on the production as well as an animator that I met who worked on the film back in the day (Joseph Gilland, animator and author of the Elemental Magic VFX books).

Back when I was in graduate school, I spent long hours by myself, whether working on my thesis film, classwork, or my part-time job as a software engineer. And it was during those days that I discovered a man who would become my favorite Bible teacher: Chuck Missler. Chuck had a unique style, to me at least, of studying the Bible: he went book-by-book, chapter-by-chapter, and verse-by-verse from Genesis to Revelation. Chuck always did a lot of extra work in providing context to what he was reading including (but never limited to) historical information, scientific knowledge, archeological discoveries, current events, military technology (a naval academy graduate, Chuck used to work in the defense industry), and even some of the 'woo-woo' stuff like aliens and UFOs. No other pastor, priest, professor, or Bible teacher I had ever encountered taught the Bible like Chuck did. And after listening to his multi-volume set about the book of Genesis on cassette tape (remember those?), I went back and re-read the first half of Genesis. It was like I had never read it before, even though I had read Genesis multiple times over the prior fifteen years. The words just leaped off the pages and came alive, forming connections with the background information that I had learned through Chuck's Bible study. Whereas before, they were just words on a page, now it was like I was a blind man who was watching a full-color movie for the first time. It wasn't just names and places, I knew who these people were and the world that they lived in.

It was a singular experience that I have never forgotten and have only experienced a couple times thereafter.

And while I didn't feel that same sense of awe and wonder as I did back then, re-watching the Gremlins sequence after reading the Art of the Movie Heavy Metal did provide a lot of nice 'ah ha' moments as I looked for details within the film that reinforced what I had learned regarding the film's production process.

Like how they got photos of an actual B-17--including the interior--from an B-17 in California--the purpose being that they wanted to be more authentic in their set design. Or how they wanted to make it look like the plane was really flying, so they used an 'anicam' setup with black and white negative film stock to film a scale model of a B-17 that was painted black with white lines. The resulting effect was an image of the model looking like it had black outlines, which was then transferred to the cels and painted.

I guess there's no real point to get at as I write this conclusion--other than, I suppose, reading books on a films' production or watching the 'making of' features on the DVDs can really give you a greater understanding of and appreciation for how films are made.