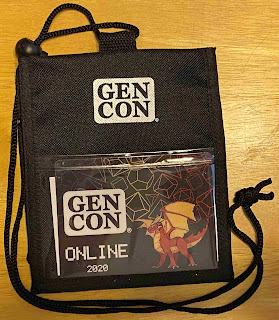 Gen Con was kind of wild card this year. I had purchased the online badge and rolled over my in-person badge to next year in order to help out the convention. The online badge was only $20, but I opted to have a physical copy shipped to me. Just because. But I was left wondering if there would be anyone running events that I was interested in. Well, I shouldn't have worried. Like I do during in-person Gen Con, I chose to split my time between events that would help me grow as an artist as well as some fun stuff--usually shopping and gaming. 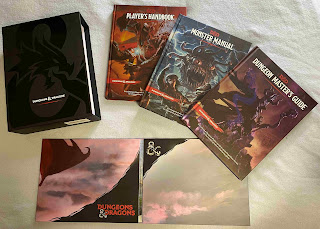 Turns out that Amazon was running a heavily discounted special on the three core rulebooks for D&D 5e, so I took the plunge. I bought the Beginner boxed set when it first came out back in 2014, but wasn't impressed enough with the set to want to get back into it, and every attempt afterwards stymied my efforts -- including when I tried to get into the local D&D Adventurer's League games only to find out that everyone was running them on Wednesdays at 5:30 p.m. (I usually get out of work around 6-ish). But, the price was right so I plunked down the cash, and when they arrived, I was very pleased with the purchase. The foil covers were nice, but I think I might get another copy of the Players Handbook--a standard edition so I won't get upset if the cover gets dinged or dented. During this time, I looked into registering with Zero Session and playing a beginners game of D&D online. Zero Session is a group of tourguides and actors down in New Orleans who are also gamers. When the lockdown hit, they went online and now, for a modest fee, run RPGs for people all over the country who are also in lockdown. My experience with them would prove fun enough that I started looking into playing D&D solo until I could find a group in my area that could accommodate my wonky work schedule--even if it means I have to start DM-ing again. The "History of D&D" panel and the "what led to the downfall of TSR" panel pretty much sealed the deal for me. Before the con was over, I ordered the Essentials boxed set, one setting book, two adventure modules and a pair of the splat books. Even after forty years, D&D is still in my blood.

The drawing session that Gen Con hosted was okay. Unfortunately though, because the models were streaming video from their homes, and there was a wide variety of cameras and lighting, it didn't exactly go smoothly as one would hope. A lot of the lighting really didn't work for the cosplay outfits that the models had chosen. And it was sad too, some of those outfits looked like the cosplayers put a lot of effort into them. I also liked how the organizers had selected models across a range of ethnicities and body types. It was really nice to get a little variety in my sketchbook.

Well, at this point, I think I'm through with the Gen Con animation panels. They're usually hit-or-miss for me, usually more miss than hit. But this year was pretty much the end. One of my big pet peeves is when you have a fifty minute panel to cover a topic and you bring in more than three people (not including the moderator) and you spend most of the time introducing the panel speakers by having them talk about themselves and their careers. It usually leaves about ten to fifteen minutes where they talk about the subject and then open for questions. Idiotic. Needless to say, when the guy who dominates the conversation during the panel is a live-action filmmaker whose only experience is watching anime with his kids--and he gets most of his comments about the Japanese animation industry and the production process completely wrong--well, it's time to move on. Add to that: the "Production Sound" panel was totally forgettable. No more film and animation track at Gen Con for me. I'd rather go back to the "Author's Avenue" cause at least there I'll learn something useful about developing relatable characters or building believable worlds or how 'print-on-demand' is changing the publishing industry. As much as I want to learn things at Gen Con that further my animation career, sometimes you just have to cut your losses and move on. 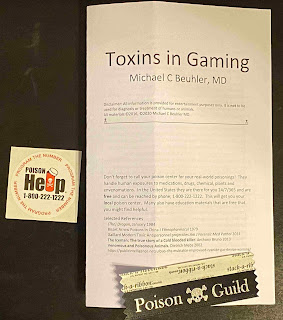 One of the high-points of the con was the poisons and toxins panel for 5th edition D&D. Run by an actual doctor, he gave a good summary of the types of poisons and toxins out there in the real world, how they are classified, and what effects they have on the human (humanoid) body. Then, he converted them into a nuts-and-bolts version that was directly applicable to 5th edition D&D campaigns complete with suggestions for how DMs could "simulate" the effects of being poisoned over time on a Player Character who missed their saving throw. His presentation was so good, I immediately signed up for the same panel that he would give on the following day.

Now, with regards to gaming, I had the chance to play both Senet and the Royal Game of Ur with a bunch of people over Zoom. Both games were very much like Backgammon and both were very enjoyable games. I put them down on my ever growing list of games to buy (once I find someone to play them with). Online virtual gaming is... interesting. While I had a good time playing the card game "Sushi Go" in an online venue that will eventually be a VR gaming environment, I don't think they're ready for primetime yet. But it will be interesting to see how it all shakes out once VR is more widespread as a gaming interface.

And thus, Gen Con Online 2020 came to an end. I can sum up my experience in one sentence: Online Gen Con may not be best Gen Con, but it is much better than no Gen Con.

Hopefully next year we can all meet up again in Indianapolis for the best four days of gaming.