Animated Thoughts: Fear of Missing Out... 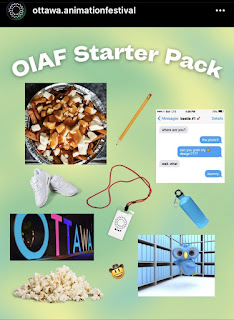 The 2022 Ottawa International Animation Festival is next week and their schedule of events, talks, screenings, and retrospectives went live on their website in August.

Part of the fun for me is looking through all the events and screenings then putting together my personal OIAF schedule--taking care to ensure that I get to see and do everything on the list but still setting aside time to eat and sleep.

While there are always a lot of good films to watch, my favorite events have to be the four panorama screenings: Canadian, World, Canadian Student and World Student. It's those screenings that seem closest to my tastes and still have a wide variety of techniques and narrative structures.

However, given that Canada is still restricting who can enter their country, 2022 will be the second Ottawa International Animation Festival that I've missed in the past twenty-eight years. My first OIAF was in 1994 when I was a newly minted grad student at R.I.T., but the first one I didn't attend was in 2005. That was the year that the OIAF went to a yearly format. For several years before that, they had been running their Student Animation Festival in the off-years between their traditional biyearly Ottawa Festival.

This has turned out to be a similar situation to my Gen Con experience. As we've been travel restricted for the past two years, I've been attending the virtual events: Ottawa's online festival and Gen Con Online. Even though we couldn't be there in person, people didn't miss out as everything went virtual through streaming services and third-party websites. This year however, I attended Gen Con Online because even though the convention was held in-person in 2022, there were restrictions imposed by the convention that prevented a lot of us from attending. But, at least they still had online options. Ottawa is now going back to their fully in-person format. And as I can't cross the border into Canada, I won't be there.

It wouldn't be an issue if they still had an online offering of screenings and presentations like they did over the past two years. But, for whatever reason, the OIAF won't be doing a split-format this year. And I'm not getting down on them. Festival Artistic Director Chris Robinson and I have spoken in the past about how an online festival is far more work to pull off than you'd expect. Given what hoops we had to run through to move our ASIFA Central yearly retreats online, I don't doubt the fact that the Ottawa festival's efforts are exponentially greater. Personally, I think that they're making the right call doing either one or the other. It's been a tough two years and they need to make the best decisions possible for the long-term viability of the festival. I'd honestly rather miss out for a year than see an attempt at a hybrid online and in-person event with limited resources and end up losing the festival entirely.

But it still aches. I look forward to visiting Canada every year. Throughout the year, I'd work extra jobs and save money so I could spend a couple days relaxing in Toronto, visiting with friends, and soaking up the culture. Some years I'd search through the used book stores for those rare, out-of-print treasures. Other years, I'd visit multiple cultural and artistic centers, like the various museums and the zoo where I'd take lots of photographs and videos for reference material all while doing some sketching in my sketchbooks. And then there was meeting up with friends in town and discovering some new restaurants as well as enjoying others from trips past. And there were always opportunities for personal growth. During my last trip to Canada in 2019, I confronted my fear of heights and did the CN Tower Edgewalk. After being energized by the short respite, I'd drive the remaining five hours to Ottawa and spend the next five days watching some of the best animated films the world has to offer all while talking to colleagues and enjoying the rich culture of Canada's capital city.

For Gen Con this year, since I couldn't be there in person, I attended their Online events but also made my own convention experience by playing some games with friends at my local game store and rebuilding a portion of my vintage gaming collection that was lost to the sands of time. This year, I plan to do something similar for Ottawa.

Instead of spending money on food, travel, hotels and the occasional souvenir in Canada, I'm going to save money for next year by doing things in the area that are relatively inexpensive.

I still plan on following the Festival on social media and watching the trailers and bumpers that they post on YouTube. But I'll be putting together my own schedule of films to watch during that week's vacation--I'm looking at you Evangelion:3.0+1.01 (Thrice Upon A Time) and Witcher: Nightmare of the Wolf. Then there's the Netflix relaunch of Bee and Puppycat which went live on September 6--which I've been saving for a binge-watching session. And the latest episodes from season 6 of Rick and Morty... I'm definitely going to get my money's worth out of those streaming services. I'll also be ordering a couple program guides and t-shirts from the festival for my collection, just like I did in 2005. So I'll still have an unbroken series of program guides and festival readers running back to 1994. If I'm feeling up to it, I might even make a batch of "OIAF 2022" cupcakes for my "evening screenings". And since I'll still be in Michigan, there's no reason to take a vacation day from teaching at CMU. Nothing says "animation" like spending a day instructing students about the rich history of animated film and watching some cartoons with them.

Will also have to fit in a trip down to the Detroit Institute of Arts to soak up a little culture (I already have a yearly membership). And a visit to the zoo should be in order (I really need to dust off those sketchbooks and get some drawing time in). I've also got a copy of one of the last books Bendazzi wrote before he passed away, called 'Twice the First: Quirino Cristiani and the Animated Feature Film' which I'd like to read. And Chris Robinson has an article on the state of Canadian animation which he published in August that I need to review. Should be a full week. 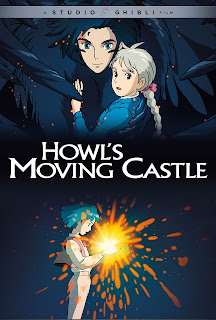 Interestingly enough, Fathom Events is bringing back Studio Ghibli's Howl's Moving Castle for a limited three-night screening during my vacation--starting on the last day of vacation. 'Howl' is one of the few Ghibli movies that I don't like. However, last semester, a student of mine wrote a term paper talking about 'Howl' and I have to admit that her paper was so well researched, so engaging, so interesting that it has awakened the desire to take another look at this movie with new eyes. Would be a nice endcap to the week off of work. So, all things considered, my vacation time can be enjoyed for very little in the way of out-of-pocket expenses.

I think though, one of the better uses of my vacation time will be to take a second look at a film that I've been trying to work on for a couple years now. The first step will be a quick viability study -- making sure that I have the time and the resources to complete it before next June. Then I'll do some quick thumbnail storyboards and see if the story still holds up. After that... who knows. Maybe I'll have an entry for 2023's festival. 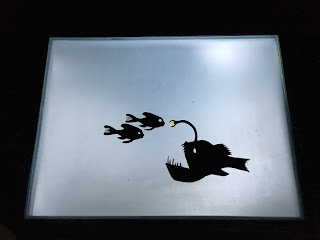