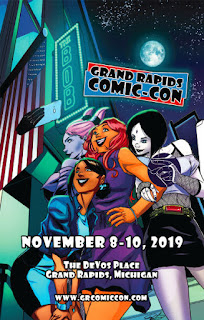 November was a decent month for animation between the Grand Rapids Comicon and the TAAFI Industry Day.

It's my policy to not buy a ticket for a comic convention (or an anime convention for that matter) until after they've published the schedule of events, but the GRCC usually delivers some choice events and guests so it's been on my list of cons to not miss for a while now and this year did not disappoint.

There were really only two "events" I was interested in this time around in addition to visiting with a pair of voice actresses.

The first was Jarrett Ardell's lecture on animation history, specifically events surrounding the divergence between the Western animation style and the Japanese anime style. All-in-all, rather informative. Didn't tell me anything I didn't know already, but it's always useful to hear someone present a topic in new and unique ways. Even if I'm already well versed on a subject, it never hurts to learn new ways of communicating ideas.

The second event was a presentation by Patrick Warburton. For those who aren't familiar with his work, he's the actor from Seinfeld and Rules of Engagement who also does a lot of voice acting, like Brock Sampson from the Venture Bros. and Cronk from the Emperor's New Groove. Always a good time hearing how someone got into the business and the funny things that happened during the span of their career.

And I was able to get two more voice actresses to autograph my Art of Overwatch book: Carolina Ravassa, who voices Sombra, and Chloe Hollings, who voices Widowmaker. I really love the Overwatch and League of Legends cinematics, so it's a real treat to meet the people who played a role into bringing those properties to life.

A real highlight of the experience was when I was waiting in line with a couple other people for Carolina Ravassa to open her booth for autographs. She and her handler show up, she sidles right next to me and starts complaining about how irritating it is when voice actors don't show up on time and make people wait, as if she was one of the people waiting in line. Love her sense of humor. 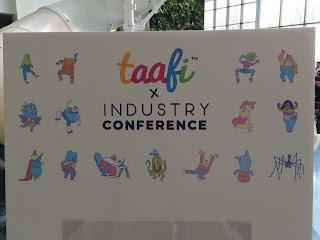 A week earlier, the first weekend of November found me returning to Toronto for the Toronto Animation Arts Festival International's yearly Industry Conference: two fun filled days of lectures, presentations, and networking opportunities about my favorite subject in the whole world: animation!

This year, my schedule went pretty heavy on the Canadian animation scene. Granted TAAFI focuses primarily on Canada's animation industry, but I found myself gravitating towards those presentations more than those focused on the American industry. Toronto is a major hub for the Canadian animation industry and, given its proximity to Michigan, is a lot easier to get to than Hollywood or New York City. So, I attended TAAFI hoping to glean information on what the job market looked like for new graduates in the States looking to maybe jump the border for internships or jobs. And TAAFI did not disappoint. I repeatedly heard that the Vancouver and Toronto animation industries were in the midst of an animation production boom and were looking for animators. Always good to hear, even if it's a number of American productions that are outsourcing to Canada.

One high point of the presentations was how there seems to be a growing level of respect for short films produced by independents and animation studios in their spare time. Shorts are a fantastic way to tell those smaller stories that'll never be made into a feature and at the same time test new tech that could be used in feature films (see Disney's Paperman and the Meander software). With regards to large studios making shorts, Sony's Oscar winning film Hair Love and Pixar's Kitbull (which came out of their SparkShorts program) are two of the most recent examples that really struck a chord within the community.

A benefit of Disney having their own streaming service is that these shorts could find another audience outside of the festival circuit and (sometimes) YouTube channels. I remember many, many years ago when my brother and I were at the Ottawa International Animation Festival. The festival events were over for the day and we were back in our hotel room watching the Canadian Teletoon channel when, between a couple of shows, they showed some independent short films instead of commercials. For the longest time, the only way to see these innovative shorts were at festivals or the occasional traveling program, like the 'International Tournee of Animation' or 'Spike and Mike'. And while websites like Atomfilms and Icebox may have floundered back in the early 2000's, YouTube, Vimeo, and now sites like Disney+, are bringing these films to a wider audience. :)