This year, ASIFA/Central partnered up with the Mosaic Film Festival for our 22nd Annual Animators Retreat. In exchange for being a 'value-add' to their festival, we were given use of the the Konig Micro-Cinema and it's lobby to host our events. It worked out pretty well too as partnering with the MFF allowed us to share the crowd between their and our events. Throughout the weekend, I spotted people drifting between the films being shown in the Peter Wege Auditorium and our animation programs and events in the Micro-Cinema.


Friday began with our annual reception where our members from all across the mid-west drifted in for cake and camaraderie. This year, tradition was broken as the ASIFA Central cake made it to the reception unscathed! Apparently we've discovered the secret to not damaging the cake: have the Peterson's bring it with them. Though they might not realize it yet, succeeding at this challenge has ensured that Jennifer and Gordon will be the 'keepers of the cake' for future ASIFA Central retreats.


Afterwards, we all retired to the Micro-Cinema proper where we saw this year's ASIFA International Animation Day screening curated by Brad Yarhouse. Two of my favorites from a very solid program of world-wide films produced by ASIFA members hailed from ASIFA Atlanta:

And Create by Dan MacKenzie.


Given that in my (much) younger days, I had studied a little Kung Fu, ASIFA China's A Warriors Dream by Jin Li really resonated with me.


The day ended on a very high note as Deanna Morse graciously opened her home to myself and Gary Schwartz for the weekend. So after we all left for the evening, the three of us sat around her dinner table and talked animation over tea and cookies.


Saturday flew by faster than expected as we held one event after another starting with the first of several student animation screenings set up by ASIFA Central Treasurer Deanna Morse.


However, while many of us were watching the student screening programs, Gary was out in the lobby working with students who came to the Mosaic Festival, producing a spontaneous stop-motion animated film (seen below).


Before long though, we all broke for lunch and took over a restaurant as we crowded several tables together to continue the shop talk from the previous evening's reception. But before we knew it, it was time for the afternoon screening followed by my History of Women in Animation presentation. Afterwards, when I compared the results of my 'game show', I was surprised to see how our animation industry veterans stacked up against a bunch of animation students and anime fans from when I first gave this presentation at Shuto Con. The results were almost completely opposite of each other. The students at Shuto Con did really well in the television and anime categories, so-so in the feature category and not very well in the independent animation category. Our ASIFA members and guests did well in the indie category, about average in the feature category, and not so well in the television and anime categories. But, everyone had fun and it gave me some more ideas on how to improve my presentation for next time. And as a tribute to her 100th birthday, I ended the presentation with a short film on the life of British animator and studio co-owner, Joy Batchelor, produced by Joy's daughter, Vivian Halas.


The next presentation was our longest and is always a crowd pleaser: the Animator's "Show and Tell" session. Here is where we all get a chance to load up our work onto the big screen and then stand there in front of everyone and share about what we're working on. And there was a great mix to the presentations! We got to see some really solid student work coming out of Huntington University, Kendall College of Art and Design, Grand Valley State University, and Ferris State University's Digital Animation and Game Design program. Additionally, our professors like Steve Leeper and Brad Yarhouse updated us on the films they're currently working on in what little free time they have outside of their respective programs. And people like myself had the opportunity to show some work from 'the other side of the tracks' (forensic animation and historical animation) proving that you don't have to work for the entertainment industry to make a good living in animation. A really nice treat during our program was that a high school girl from Toronto, who had a film in the Mosaic Film Festival, attended our 'show-and-tell' gathering and took the opportunity to discuss her body of work.

The rest of the night after the evening screening remains a little hazy. I remember visiting Brewery Vivant with Steve Leeper twice, once just the two of us and once with Gary, where we all swapped stories and discussed the state of the industry. For those who don't know, Brewery Vivant is a microbrewery in what used to be a Christian chapel, and they serve this delightful hard cider from Vander Mill over in Spring Lake, Michigan. 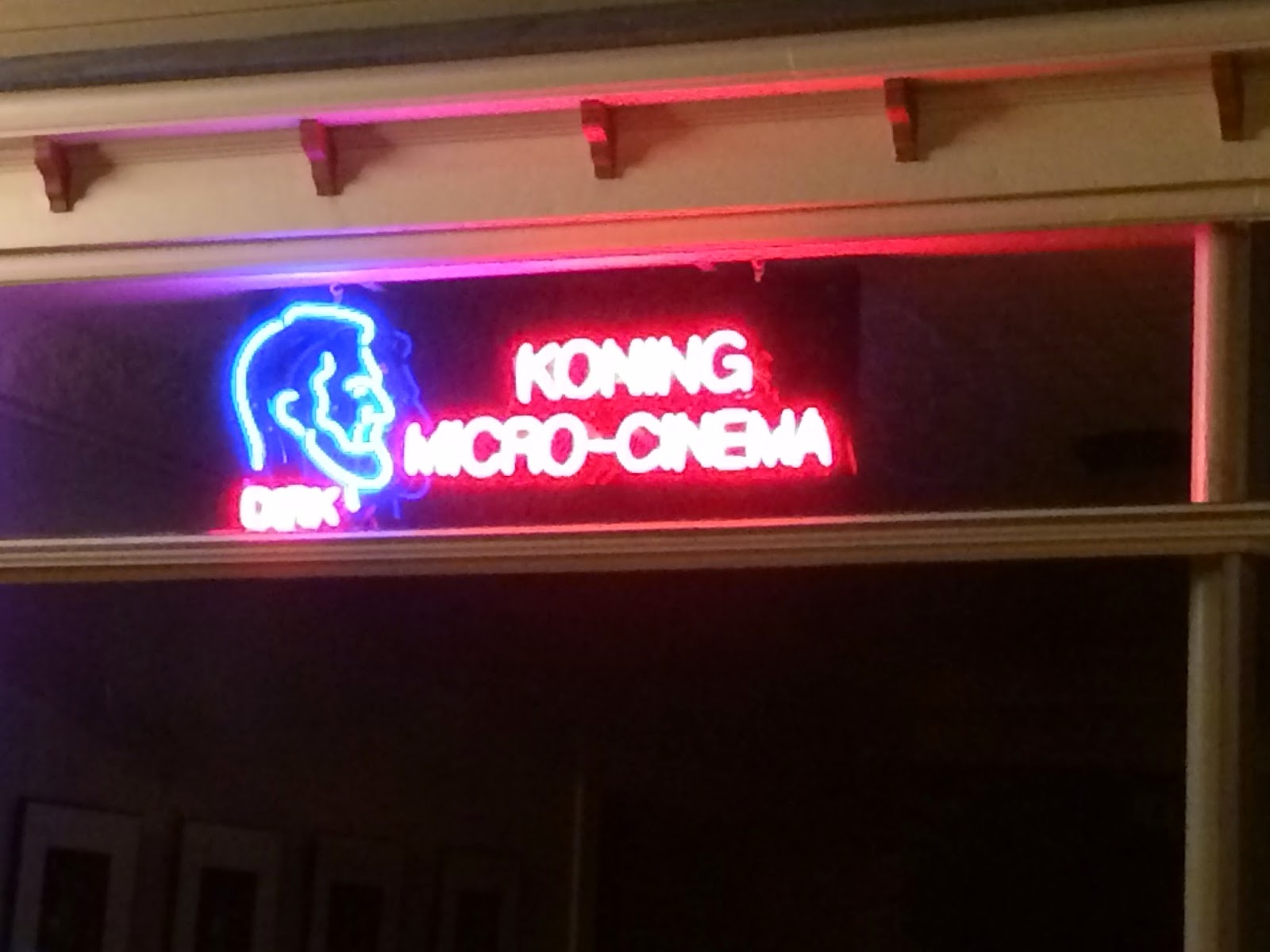 Sunday found a number of us over at Brad Yarhouse's home where he graciously hosted an ASIFA Central members end-of-the-retreat brunch with myself, Stephen, Lynne, Gary, and ASIFA Central President Jim Middleton. It was a really nice time to reflect on the prior weekend's events--all the while the conversation being split between animation history and plans for next year's retreat. One of the best things to come out of all these discussions between our officers and members was a ton of fresh, new ideas--including a pretty substantial break-down regarding what we could do to improve our current events and what more we could offer next year to make the 23rd annual retreat even better.

In the end though, the ASIFA Central retreat is more about camaraderie than watching films or learning history. Animation can be a very solitary experience, especially when your group covers such a wide range of area across the country. It's always exciting to show up and discover who's going to make the trek for the weekend. Which makes me even sadder to see how few students show up for our retreat. Even though ASIFA Central is one of the few branches of ASIFA that allows students to join our roster, and even though our retreat is free to both members and non-members, it's disappointing to see students missing out on a great opportunity to network with those of us who are currently working in the field. Just off the top of my head, I can think of at least eight universities here in Michigan with animation programs--more if we expand to include the four States surrounding us. When I see all the students who make the trip out to Ottawa for the yearly animation festival huddling in their little groups, I have to wonder how many of them are missing out on a unique opportunity by not making a hour or two drive to meet the local animators in their own back yard? You never know when you'll meet someone who can point you towards a future employer, or have a solution to the production problem that has been vexing you for weeks, or introduce you to a new style of animation, or even help you find that mentor you've been searching for. The internet has allowed us to network with animators all around the world, but social media can't replace that face-to-face contact you get at a festival or a retreat.

Well, normally, here would be where the "next post... the Waterloo Festival for Animated Cinema" tagline would appear. Unfortunately, there was no WFAC this year. Turns out that for reasons of his own, festival owner and curator Joe Chen decided to take a break. Given how much work it must take to program four days of feature length animated films, and both research and write introductions for said films, and make sure you have all the equipment to play them in their received format, AND advertise your festival, well, after thirteen years, I'm sure that Joe needed a break even if WFAC was a labor of love for him.

Joe's Waterloo Festival for Animated Cinema was where I would normally watch most of the features that would end up being in competition for the Annies and the Oscars. It had become my traditional end to the festival season, that treasured four day weekend where I'd watch animated features that I would never get to see otherwise, hunt for deals at the local used bookstores, enjoy the local cuisine, see some friends from TAIS, and enjoy a little solitude so I could marshal my strength for the following weekend's trip to Boston for Thanksgiving with the family.

While Joe has been pretty quiet about any future plans, many of us regulars are hoping the Waterloo Festival will be back in 2015.