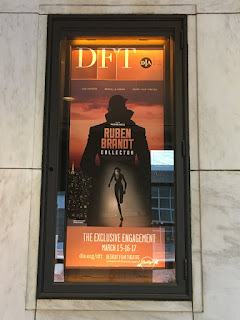 In March, the 'post-Winter and yet still pre-Spring' doldrums were setting in. The snow was almost gone, leaving patchy brown grass in its wake. The sky was still grey and overcast. And although the time change left us with more light during the day, still, the warm sunlight was noticeably absent other than the occasional glimmer at sunrise and sunset. Rain and sleet were pervasive.

In order to get the much needed pick-me-up that would carry me to the first few days of Spring, I engaged in my time-honored tradition of appreciating some art.

As fortune would have it, the Detroit Film Theater was showing the English-dub version of Ruben Brandt, Collector. I had already seen this visually engaging film at TAAFI a month earlier, but I leapt at an opportunity to see it again. At TAAFI, they showed the English-subtitled version. And while I don't shy away from watching films in their original language, a film like 'Ruben Brandt' with all it's surreal visual imagery (and artistic Easter eggs) needs to be seen in a format that allows you to take it all in without having to split your attention between the film and the subtitles.


However, before the film, I decided to spend the better part of the afternoon looking at paintings. After observing the watercolors in the newly refurbished Asian wing, I headed upstairs to spend time with the DIA's lone Monet painting. Sadly, 'Rounded Flower Bed' (formerly known as 'Gladioli') wasn't on exhibition, having been loaned out to another museum for the next six months, but it did offer me the opportunity to do a little exploring of other works of art. I soon found myself tracking down one still-life painting after another with the common theme of 'food'.


Other than an appreciation of the paintings themselves, much of what I was looking for with this little exercise were instances of near-realism within these paintings--like the use of color to create the illusion of three dimensions within a two-dimensional image. 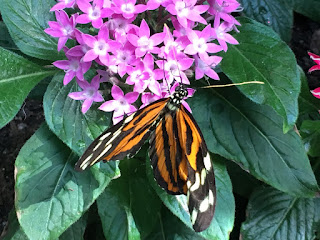 A week later, I made a day trip over to the West side of Michigan, starting with Meijer Gardens up in Grand Rapids for their yearly exhibition of butterflies. I'll be honest, I wasn't feeling it. After struggling to navigate hordes of toddlers and crotchety older people for a half-hour in order get a decent photo, I switched tactics. Instead of standing over a butterfly, patiently waiting for it to spread its wings only for the insect to be scared away by a little kid or hear a nasty remark from an older person who wanted to get by me, I started looking for the butterflies that were simply resting. If you've ever been to a butterfly conservatory, you know that this pose is far more common (as seen in the picture below). 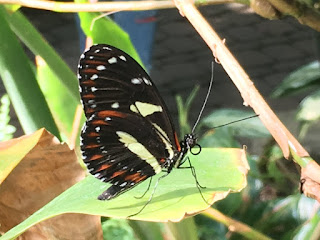 The pressure off, I left Meijer Gardens about an hour later with some beautiful photos of butterflies and plants that I was really happy with.


After a quick lunch at a Chinese restaurant by the gardens, I made my way down to the Riveria Theater down in Three Rivers for a screening of the documentary 'Loving Vincent, the Impossible Dream'. 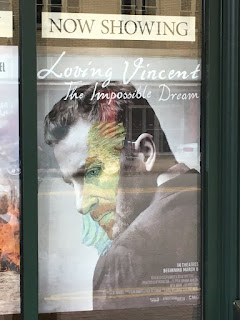 Loving Vincent is a very captivating film and watching the documentary provided a very revealing look into the making of this singular feat of animation. It is the "world's first fully painted feature film", after all. And while I did find learning the background of the directors and their struggle to get this film financed and into theaters entertaining enough, I was honestly more interested in the nuts-and-bolts of the production.

For example: I found the transformation of an empty warehouse into an animation studio filled with curtain shrouded cubicles containing built-in projection systems for rotoscoping with oil paint to be far more fascinating.

What also piqued my interest was the process that they used to weed out all the experienced oil painters that they needed to create the 65,000 frames of film as well as how the painters were apparently paid per painting. If I understand correctly, on the production, the more paintings you produced, the more you got paid. No small feat when you look at the complexity of the images in the trailer below:

Loving Vincent is now available for viewing on various streaming services (like Amazon Prime, Hulu and YouTube), as well as available on DVD and BluRay. So if you have an afternoon, it is highly recommended viewing.

Well, the last gasp of Winter was bittersweet this year as it was, what would be announced about a week after the convention, the last Shuto Con to be held in Lansing.

There were rumblings of declining quality, increasing prices, and financial instability over the past few years, but I took them all in stride as I had been attending my local con since it's inception in 2011.

This year, the con had scaled back to a fraction of its original size as the owners fulfilled the final year of their contract with the venue.

The mood that weekend alternated between festive and somber, depending on who you asked.

Don't get me wrong, I made a decision to have a great time no matter what, and I was not disappointed. However, my worst fears were realized when the convention owner went on social media with the announcement that they were throwing in the towel and ending the con for good--leaving Lansing with one less venue for animation and one less place where I felt like I belonged.

Shuto will always hold a special place in my heart as they were the first venue that provided me space and equipment to do presentations and screenings on the history of women animators. Even though they were a Japanese animation and culture con, they saw the value in my work and for that, I will be forever grateful.

Regardless, it "is" times like this when I wish I lived in a bigger city with more opportunities to be social and engage in activities that interest me. Such is life. 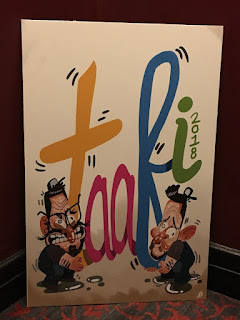 This year, the management of TAAFI decided to split the festival into two parts: the first was an industry day back in November 2018, which was filled with presentations and talks given by industry luminaries, and the second was three days of the animation screenings we know and love so well.

With it being the beginning of the year, I decided to forgo taking any vacation time off of work to see the sights in Toronto and just drive out on Friday morning. However, after checking in to my hotel, I had some time before the evening's opening ceremonies and first screening, so I quickly grabbed a late lunch at Monga Fried Chicken (if you've never been, I highly recommend it) and gathered lots of photo references at the Royal Ontario Museum all on my way over to the Hot Docs Cinema.

My goal at the ROM this time out was seeing "Zuul" as he was now on display. For those who don't know, Zuul is the name of the ankylosaur "recently" discovered in Montana and purchased by the ROM. Paired up in the display with a gorgosaurus model, apparently of the skeleton found near Zuul, along with examples of other ankylosaur bits for comparison, examples of man-made armor, and some videogames that were used to teach kids about how much damage an ankylosaur could do when it swung it's armored club of a tail.


However, before leaving the ROM, I snuck over to the geology wing while they were setting up for a fund-raising event and took some photos of a couple gemstones and minerals that I had missed back during September's visit. 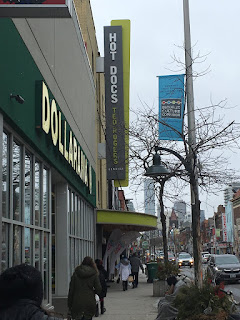 Then it was off to the Hot Docs cinema where I spent the better part of the weekend talking to Lynn Dana Wilton, Pam Rose, and Lynne Slater while waiting for the screenings to start. And although there were some pretty solid short films during the TAAFI experience, for me, the high-point of the screening lineup was the two feature-length animated films: Ruben Bryant, Collector and MFKZ. Both films were surreal experiences in their own way -- Ruben through the incorporation of classic works of art into its visual style and MFKZ through the frenetic action and character designs that looked like they leapt off the pages of Metal Hurlant magazine. I had many a wistful thought of the Waterloo Festival since these were two movies that would undoubtedly been screened by Joe Chen.

The rest of the festival was a blur with some really creative short films, a pre-release screening of How to Train Your Dragon 3 -- complete with a post-screening Q&A from director Dean DeBlois and Hiccup voice-actor Jay Baruchel -- and time left over for mixing with colleagues and students.

I'm honestly not sure if TAAFI will stick to this format, but I personally appreciated it. I love both TAAFI events (industry and screening) for different reasons. Both events focus on the two parts of the Ottawa International Animation Festival that I enjoy the most: animation presentations and films. And now with the new format, I can enjoy them to their utmost without having to skip out on one to enjoy the other. For someone like me who travels five hours to Toronto, having TAAFI now being two festival events may be a little more pricey, but they're both worth making the trip. 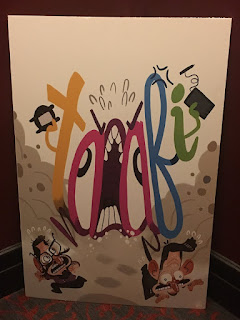