I needed more space in the bookshelves for my gaming collection. The plan was to buy a half-sized bookshelf and move my Dungeons & Dragons collection over to the other wall. Thus, I'd have almost an entire bookshelf where my BattleTech collection could expand instead of being split between two walls. Well, on Sunday, I purchased what I thought was a workable solution: a bookshelf with the correct height and width and more importantly a number of adjustable shelves. Only when I got it home and unpacked it, the shelving unit turned out to be scaled for DVDs or CDs.

Now normally that wouldn't be an issue since the bookshelves were adjustable. However, when I got it out of the box, both the sides of the unit and the shelves were only about six inches in depth. Therefore, my full-sized D&D books would stick out and would probably fall onto the floor.

After thinking about it for a while, I realized that the bottom shelf would work for the full-sized books in my bedroom's bookcase and the upper shelves would fit my manga/light-novel collection perfectly (I'm keeping up with Arpeggio of Blue Steel, Delicious in Dungeon, and Restaurant to Another World). All I had to do was swap out the two bookshelves and I was back in business! Or so I thought.

Assembling the new shelving unit was an exercise in frustration as it broke several times during the whole process. However, it was corner clamps and Gorilla Glue to the rescue! And within two-hours, I had the display all put together and ready to accept books. 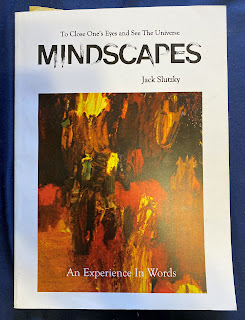 Here's where the moment of serendipity occurred. Despite the disappointments and frustrations of the previous two hours, I soldiered on. And while the glue was setting on the new shelving unit, I removed all the books from the old bookshelf so I could move it to my gaming room. And there it was. On the bottom shelf, wedged between the inside of the bookcase and my oversized copy of the Red Cross First Aid/CPR handbook was my original copy of Jack Slutzky's book Mindscapes.

The cover showed no signs of wear or fading. It was as pristine and crisp as the day I had bought it, minus a little bending at the binding from its first reading. It now rests on the shelf in my office, with the rest of my textbooks from R.I.T.--right next to the autographed copy of Mindscapes which I bought as a replacement last December.

If I had taken the new shelving unit back to the store or if I had tried to use the new shelves for my D&D books, it might have been years before I found my copy of Mindscapes. If I hadn't misplaced it in the first place, I wouldn't have bought a replacement copy -- which turned out to be signed by Jack himself.