Animated Thoughts: The Year in Review - 2010

2010 was a good year for Smudge Animation, a very busy year, but a good year.
The year opened big with a new project for Thistle Threads/FabricWorks out in Boston. Building upon the 18th century goldwork project from 2008, we started a series of web classes designed to teach historic needlework techniques which would require me to perform both website development as well as animate twenty-eight silk and gold stitches using Adobe Flash.
In March, I had the pleasure of listening to my sister give a presentation at R.I.T., my alma mater. While driving Tricia around Rochester, hearing her speak, and showing her the initial animations that I created for the goldwork class was an enjoyable experience, the high point of that weekend was having the chance to spend an evening with my former professors – a tradition I hope I can keep to as often as possible.
April found me returning to Toronto and the community I have grown to love and be a part of. Having spent the past two years attending their workshops, I ended up becoming a full-fledged member of the Toronto Animated Image Society and followed it up with a workshop on Pixilation with animator, author, and instructor Bryce Hallett.
May saw me in England. Working with Thistle Threads, I took photographs and helped scout out museums for a tour that Dr. Nguyen was giving in September. Had a day off during those two weeks and spent the entire day in Paris. The tour was very nice, I loved the city and I understand why people save up their entire lives to take a trip there, but the Musee d’Orsay was really the best reason for me to be there. I have loved Monet and Renoir's paintings ever since high school, so to be inches away from the originals, close enough to examine the angle of the brushstrokes, well, it was as close to a religious experience as I have ever been.
In June, it was back to Toronto for the annual TAIS summer screening where I had a short film entered in their SummerJam. Then back home to continue working on the goldwork animations. In July, I spent some serious time in Washington D.C. photographing rocks and gemstones and butterflies at the Smithsonian--basically working on my photo reference library. Then I skipped back to Toronto to see the Best of the Ottawa 2009 festival. Toronto was entertaining, the films at the screening were decidedly less so.
August saw me driving back to Indianapolis for GenCon. I took some seminars to work on my painting skills, touched base with a couple clients (and delivered a CD catalog product), then a took quick walk over to the Indianapolis Zoo for some quality time in their butterfly house for the continuing work on my photo library. Then it was back to Toronto where I spent half a day taking care of my nephews while Dr. Nguyen worked with the curators at the R.O.M. The rest of the time was spent working on the Historical Needlework classes with Tricia. Thank you wireless internet access in the hotel room! Am confounded how much more efficient Trish and I are when we're working on this stuff in the same room at the same time. Might have to reconsider moving to Boston.
September was a truly busy month. I worked with Tricia to produce several videos for the Jacket Tour of England and Scotland while continuing with the web development and animation for her classes. The videos would be shown on the two tour buses while the attendees were on their way to the museums. It was some conversion to PAL work on a couple of her previous videos but the rest was putting together a lot of pan-and-scan slideshows. Given that Tricia took the women on the tour into the parts of museums that most will never see, many of them described the tour as a 'once-in-a-lifetime' experience.
As Fall turned to Winter, things started to ease up. I took my bi-yearly trip to the Ottawa International Animation Festival and my yearly trip to the Waterloo Festival for Animated Cinema. November was a good month for animated feature films as I also go to run down to the Detroit Film Theatre to see “My Dog Tulip.”
When I look back at the year, I see a lot of work in the historical side of animation, but not a lot on the forensic side or teaching. Due to the recession, there just weren't a lot of forensic animations to do. And I was just too busy to teach. I wanted to kick start my 'Get Animated' program but it simply didn't happen. It seems that when one area is busy, the other sides of the equation are slow. It's good for my blood pressure, but leaves me feeling like I'm falling behind in the others. For 2011, I'd like to see the scales balance out somewhat--do some more teaching and practice more forensic animation. I'd like to achieve some balance in the new year.
Posted by Charles Wilson at 12:00 AM

I'm going to take a break from the usual holiday themed animations to share this video that illustrates the genius of stop-motion animator PES. Clearly influenced by Jan Švankmajer (watch his film Dimensions of Dialogue to see what I mean), PES has created a beautiful short film combining stop-motion animation, found-objects, and replacement animation with a moody, etherial soundtrack. This is one of those non-narrative short films that gets everything right, in my opinion. Would have loved to see this on the big screen at Ottawa this year. I think it would've fit in nicely considering the sensibilities of the typical animators who attend. I honestly wish I could say more about this film, but at the moment I'm just awestruck at how well each and every detail integrates into the whole film. 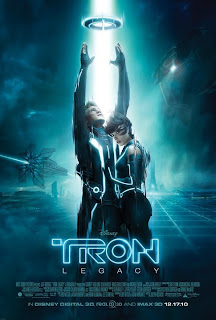 I don't think that there's any way I can give an objective review of "Tron: Legacy" as the original "Tron" was the quintessential film of my youth. Back in 1982, my father took me to see "Tron" at the Meridian Mall East 4 theatres. The movie "Tron" is one of the main reasons why I became a computer animator--yes, there have been other inspirations over the years--"the Mind's Eye" series of films, for example, along with countless Anime and Disney films--but "Tron" remains the first.

I went into the movie theatre cold. Rather then read previews and look over spoilers, all I did to prepare for Tron: Legacy was listen to the Daft Punk soundtrack and read the graphic novel that describes what happened in the period of time  between the first "Tron" and "Tron: Legacy". I have to admit, no matter how much I enjoy Daft Punk (and how excited I was to hear that they were doing the soundtrack), when I actually heard what they produced, I was uncomfortable, partially because it was so different from their "Interstellar 5555" album--"Tron: Legacy" has a much more heavy industrial feel when compared to the pop/disco/dance club feel of their earlier work. 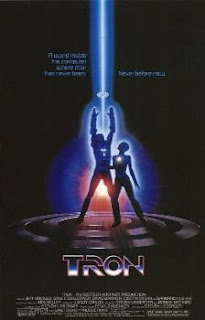 So, knowing that there was no way that the sequel could ever live up to any expectations due to the impact that the original has had on my life, I was free to experience "Tron: Legacy" as more of a stand-alone film.

All-in-all, it was a good sequel. Like all sequels, it has its flaws. But the positives outweighed the negatives. I would have liked a little more time on the game grid, a story that was a little more solid, and even though it was handled very well, I don't like 3D films. But the acting, visuals, VFX and animation were very good. I liked the '80's culture references and the soundtrack fit the movie perfectly (the Daft Punk cameo was amusing).

I think that the original Tron was a roller-coaster ride because it broke new ground. But by the time "Tron: Legacy" screened, we'd already been through "Ghost in the Shell", "the Matrix" films, and "Technotise, Edit and I"--really, we've been set up to be a little deflated with that 'been there done that' feeling. That's kind of why I feel that if they made the script just a smidge stronger, it would've made a really big difference. But in the end, I feel I got my money's worth out of "Tron: Legacy". I'll go see it again several times before it leaves the theatres and Disney is guaranteed a DVD sale from me next year--I just hope they put a ton of 'making of' features on the disk. :)
Posted by Charles Wilson at 12:05 PM

One journalist, writing a piece on me said, "I was told you are crazy: that you actually kick people out of your programs for talking."

I told them, "I do not think people go out to public events such as concerts, dance, lectures, movies and the theater to listen to members of the audience talk during the presentation."

"I never thought of that," the person replied.

Christmas is right around the corner, so here's an early present from Simon Tofield: a Christmas themed 'Simon's Cat' animation. *<[:3
Posted by Charles Wilson at 4:00 PM

Since Christmas is on the way, here's a Grickle!

Graham Annable has a twisted sense of humor that can sometimes meander a little too far into the abstract for my tastes. But with this animation, he shows off his good sense of timing with a solid set-up for a short little gag film.
Posted by Charles Wilson at 11:06 PM