Animated Thoughts: Time takes its toll from us all 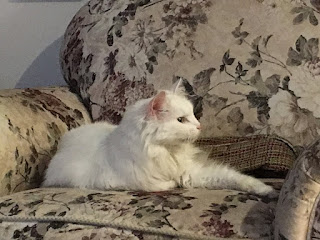 When I moved back to Michigan in 1998, my brother was still in high school and working at our parents' auto repair garage in his spare time. One rainy day, a white kitten walked into the garage, sauntered into the office like she owned the place, found a box, curled up, and went to sleep. Ted took her to the vet and started treating her for ear mites. Then, he brought her home. She was white and fluffy with a gray streak down the top of her head that looked like she had walked under a car and gotten axle grease on her head. Our family cat expert, Aunt Claire, said that she'd probably lose it as she matured into a completely white furred cat. She did. But the name stuck.

As I started doing more freelance work, I quickly realized that an LLC had distinct legal advantages over a D.B.A. But I needed a name for my corporation and it was Smudge-kitty to the rescue. Since I had used the Photoshop smudge tool in my M.F.A. thesis film and we had a cat named Smudge, it seemed apropos. "Smudge Animation" would join the ranks of animation studios named after cats, like Carol Beecher and Kevin D.A. Kurytnik's Calgary studio: "15lb Pink".

Well, Ted went to college and I bought a house and moved out. Smudge stayed with Mom and Dad and their other cat, Claude (who I named after the Warner Bros. cartoon character "Claude Cat" from the Merrie Melodies cartoons Mouse Wreckers and the Hypo-Chondri-Cat ). Claude passed on a couple years back and my parents became a 'one-cat-family' with Smudgie doing double duty keeping my parents company when they were sick or bounding downstairs to say "hello... time to feed me" when they came home at night.

But time takes its toll from us all and Smudgie was no exception.

Recently, Mom and Dad were presented with the opportunity to take a 'bucket list' vacation with the grandkids and so I filled in on cat duty while they were gone. I'd feed her in the morning on my way to work, then spend a couple hours with Smudge after work. We spent most of our time in Mom's sewing room, sitting together in the big comfy chair while I read a book and pet her. But after 20 years, Smudgie had decided that she'd lived long enough. A couple days before Mom and Dad came home, she breathed her last while I sat there and stroked her soft, glossy white fur. 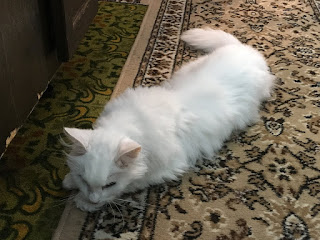 I wish that I had been able to convince Smudge to stick around long enough for Mom and Dad to come home and say 'goodbye' but we had to settle for me tracking them down in South America and resting the speakerphone right next to Smudgie so she could hear their voices as they told her how much they loved her and how wonderful it was to have those twenty years with her as their kitty.

I'm not going to change the name of my animation studio. But from now on, "Smudge Animation" will always have this feeling of melancholy every time I say it to people and tell them the story of how I named my studio after a cat.