In October 2016, I made the last-minute decision to attend "Brick City", R.I.T.'s annual homecoming. I had been back to R.I.T. several times in the past -- passing through on the way to the Ottawa International Animation Festival, speaking there as a guest lecturer, even doing research at the Wallace Library. But this was the first time I had attended homecoming as an alumni and I used the opportunity to get a side-project back on track.

Some background is necessary.

During one of my classes in Grad School, Erik mentioned Roadworks, the only experimental film he made during his tenure at R.I.T. Don't know if it registered with my fellow students, but I thought the premise was interesting and decided to check it out at the Wallace Library. Roadworks was this short film with an experimental/jazz soundtrack where the viewer was presented with a top-down view of a road and the soundtrack was timed such that nuances of the 'music' were matched with changes in the road markings -- dashed lines, parallel solid lines, etc.

So, I watched it. It was amusing enough, even moreso because of Erik's animated tale of how he had students cranking this roll of transparent plastic (with the road marks painted on it) in step with the music while the camera recorded the production on film. Afterwards, I returned the tape to the archives and filed that memory under another interesting experience during graduate school, among so many others.

As part of my greater collection, I actually maintain a library of films produced by my professors or films that they worked on: single DVDs like Skip Battaglia's Car Crash Opera or Stephanie Maxwell's tzzzz! as well as DVD collections that they've produced professionally--like Stephanie's compilation: Animated Works 1984-2007, which she released through IotaCenter. Eh, I may not be in school anymore, but that doesn't mean that my profs don't still have lots to teach me.

About a decade after Erik's untimely passing, it dawned on me that as time marched on, nobody would remember his film because fewer of us were around to tell people about it. Professors would retire and new ones would be hired. Students would come through the program, graduate, and move on to their careers. And unless the students were told about Erik and his contributions to R.I.T.1, both he and his film would be forgotten. So, I set about making Roadworks a part of my collection. 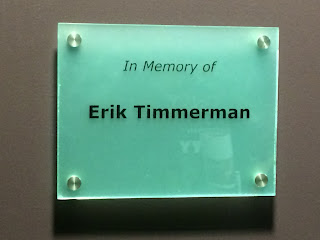 Well, fortunately some of us are bound and determined not to let Erik be forgotten. Case in point: Bill Landers. Bill is the Chief Engineer who keeps all the equipment running at R.I.T.'s School of Film and Animation. Though their relationship was sometimes contentious, Erik and Bill had a respect for each other--so much so that after Erik died, Bill had a plaque to commemorate Erik installed in one of the halls where the SoFA's animation labs are located. 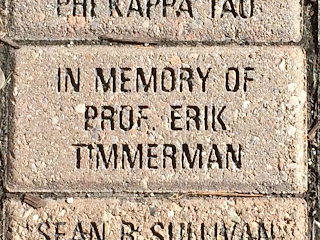 Another example is my friend Leah. Both she and I donated commemorative bricks in Erik's name which were installed on R.I.T.'s Philanthropy Way (the Legacy Walk) -- a sidewalk between the dorms and the campus proper.

Back to Erik's film.

In April 2013, I was visiting R.I.T. for the High Falls Film Festival in addition to doing research for my history of Women Animators project. Since I was in the library anyways, I took the opportunity to track down Roadworks and watch it again. Unfortunately, as everything was moving to digital, many of the VHS tapes were being archived and thrown away. The School of Film and Animation's copy had been rescued from a bin by Stephanie Maxwell and mailed to Erik's daughter, Erica, ensuring that at least one of Erik's children had a copy of his film.

The other copy was in the Wallace Library archives. I had done my homework ahead of time and walked into the archives with a printout of the Library's database index entry for Erik's film.

I spoke to the lead Archivist, Ms. Becky Simmons, and told her who Erik was and why I was trying to locate a copy of his film. As it turns out, Becky had never seen the numbering system for Erik's film entry in the database as it hadn’t been used for years. And, even after several phone calls to colleagues, she was unable to locate his film--if a copy even still existed at the Wallace Library. So, she apologized, we exchanged business cards, and she said she’d see what she could do. This was Friday at around 3:00 p.m. I thanked her for her time, and then walked across the library to do my research.

Around 4 p.m., I was elbow deep in the animation section when I received a call from Becky stating that she had found the library’s copy. His film had been located--sitting on a lonely shelf in a box with a couple other VHS tapes. Fifteen minutes later, I was watching Erik’s film downstairs on one of the few remaining VCRs that the library still had hooked up.

As there were only three VHS viewing stations left in the library and they were going to be retired in the not too distant future, I hurriedly ran downstairs, popped in the tape, plugged in my headphones, and watched Erik's film--hoping against hope that the almost fifteen years of sitting in a box hadn't caused the tape to deteriorate too much. Thankfully, it was in excellent condition and I watched Roadworks several times, each time bringing back a new memory of Erik and our time together at R.I.T. I was able to verify that it could be digitized with only minor clean-up needed for the soundtrack.

Afterwards, I returned the tape to Becky and asked about the procedures for preserving Roadworks. We agreed that before any digital copies were made, I first needed to contact one of Erik's children and obtain permission. It took me a couple years to track one of them down, but when I finally did, Erica quickly responded to my e-mail and gave me her permission to move this project forward.

I invite you back in August to read part three: "Brick City".


* Erik was the man who started the Graduate Computer Animation program at R.I.T.
Posted by Charles Wilson at 12:00 AM

It's July, and the animated film for this month's' "DFT Animation Club" screening at the Detroit Institute of Arts will be Nina Paley's masterpiece: Sita Sings the Blues.

This film will be screened twice over the weekend of July 15th and 16th. Details below are from the DIA's website:

Sita is a goddess separated from her beloved husband; Nina is a modern-day animator separated from her husband when he moves to India. Bickering shadow puppets act as comic narrators as these old and new stories are interwoven in a post-modern retelling of the ancient Indian epic, Ramayana, animated in a dazzling mix of traditional and collage animation style, and backed by a soundtrack from legendary 1920's jazz singer Annette Hanshaw. The result is a wryly comic, highly sophisticated work of animation that is as enjoyable for young audiences as it is for adults. To experience Sita’s visual charms on anything less than the big screen would be to miss something truly special!