Last week, I returned to Ontario for the only animation festival in the world that is dedicated to animated feature films: the Waterloo Festival for Animated Cinema, or WFAC for short. 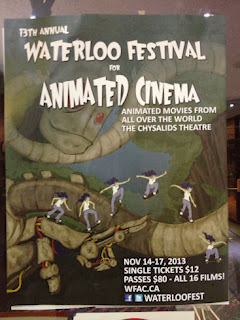 Located in Waterloo/Kitchener, the festival has been running since 2001 and is held at the Chrysalids Theater, a fully-licensed, 500 seat theater in the heart of downtown Kitchener, Ontario with an attached lounge area where festival-goers can relax and discuss the films over a drink while waiting for the next film to be cued up. 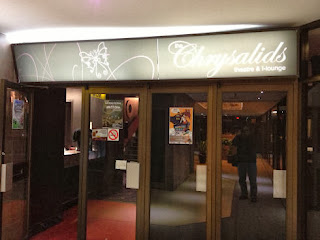 Well, no visit to Waterloo/Kitchener would be complete without a trip to the Cambridge Butterfly Conservatory, so I made that my first stop. Luck was with me as there were only three other people at the Conservatory, and two of them left shortly after I arrived. So while the lighting wasn't the best during the late afternoon, my view of the butterflies was unobstructed by people. 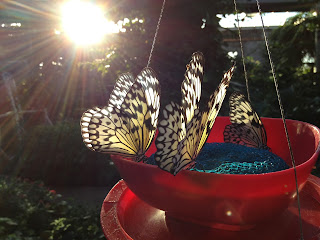 That evening, Joe started the festival strong with the delightful children's film "Ernest and Celestine".

Based on a series of children's books, this film told the tale of a mouse and a bear--both chafing under the constraints of a society that demands conformity of profession and conformity of position. The two worlds--mouse and bear--coexist but never mingle, that is until Ernest finds Celestine trapped in a garbage can. The visuals were a sumptious feast of watercolor backgrounds and ink outlined characters. Joe stated after the film that the static watercolor painted backgrounds enabled the production company to save lots of time and money as it limited the number of cels to animate. The character designs were adorable and the motion very fluid. This is definitely a film, much like Winnie the Pooh, that parents will enjoy watching with their kids.

After the show, Joe presented a live performance called "Miyazaki Madness" A tribute show to Hayao Miyazaki that combined magic, acrobatics, dance, song, fire acts, and burlesque performances all themed to the films of Miyazaki. The show was in a word "Wow!" I'm used to Cirque du Soleil shows and this was definitely not the Cirque. Thoughout the show, every act left you wondering how they were going to top the previous one. Part of the "Nerdgasm" series, this troup of performers will be worth keeping an eye on.

My photos don't do the show justice, but fortunately, my friend Grayden Liang was there in the front row and has posted a selection of his photos on his blog: "Canadian Animation". Be warned though, as three of the performances were burlesque, a number of the photos are not suitable for work. A video of the performers can be seen on the WFAC YouTube Channel here.

On Friday, after a lucky find at a local used bookstore, "Hayao Miyazaki - Master of Japanese Animation" by Helen MacCarthy, it was on to the show.

The evening's screening began with Production I.G.'s "009 Re:Cyborg". Production I.G. is getting better and better at cel-shaded 3d animation. I liked the story right up until the deux ex machina ending. If they're going to relaunch the series, then the ending works and works pretty well. If not... well, it was still a fun ride anyway--fun enough to want to track down the first three series (all the way back to the original series in the '60's).

Joe followed up with all three "Berzerk" films. Three films, roughly six hours of the most medieval violence I have ever seen in my life (outside of a Mel Gibson film that is). After the weirdness of the third movie though, most of the film took place in what can only be described as hell, I'm not sure if I want to see more or not... though I can clearly see why the manga series has been going on for so long and engendered a lot of loyalty among its readers.

Saturday's lineup was a little on the lighter side and showcased such films like:

"My Mummy is in America, and She Met Buffalo Bill", a cute film from France set in the 70's about a boy growing up and coming to terms with having an absent parent.

"The Thief and the Cobbler", Richard William's unfinished masterpiece(?) After watching this re-edit it was clear why the Warner Brothers suits pulled the plug on this film. It was a mess and none of William's brilliant animation work was going to save it. The scenes were uneven with some that were pure genius and others left looking cheap and trite. And this unevenness extended itself to the character animation. Many of them just moved like they were in slow motion. Some characters were richly designed, others looked like they were pulled from a low-budget short. All in all, it seemed like the film just didn't know what kind of film it wanted to be. However, this screening set the stage for Sunday's documentary film "Persistence of Vision" which I had hoped would explain why Williams' film failed--expecially when it had one of the masters of modern animation at its helm. Though I hadn't seen "Thief and the Cobbler" before, going into the screening, I was already more interested in the history surrounding this film than in the film itself. Now that I know it's history, I'd love to watch both the re-edit and the documentary again. As always, Richard Williams has much to teach us whether through his successes or his failures.

"Approved for Adoption", Jung Henin's tragic yet hopeful film about growing up a Korean adopted by Belgian parents--at once a resident of both cultures but never truly a part of either. I was very happy to see this film a second time, the first being at the Ottawa International Animation Festival.

"AninA" was a cute story for the kids, produced in Urugray. The film tells the story about a little girl who strikes back at the taunts of her classmates and learns to accept the consequences of her actions. Based on this one, I would like to see more films coming out of this country in the not too distant future.

Sunday started out with the Oshii Mamoru screening. I never get tired of watching "Ghost in the Shell", first time seeing it on the big screen though. Joe had the choice of screening this or the second Patlabor movie. As much as I love Patlabor, "Ghost in the Shell" was the better choice!

It was followed by "Persistence of Vision". Now this is the documentary I had hoped it would be. Pretty much every question I had about "The Thief and the Cobbler" was answered. So much talent, so little focus. It amazes me that Williams launched this project without cohesive, structured pre-planning. I have to give the man a tremendous amount of credit though, to stick with a project for 28 years and finance it outside of the regular studio structure. Williams was truly a man driven, sadly it looked like he lost sight of his film's story long before he lost control of his film to Warner Brothers.

The last film of the festival was "Rio 2096: A Story of Love and Fury". I've wanted to see this film since it was announced on Cartoon Brew years ago. It did not disappoint. What an amazing story! Brutal though. The history of Brazil with all it's pain and brutality. The film tracks the story of an immortal warrior who struggles throughout 600 years of oppression in Brazil on the one hand, and on the other, struggles to find his lover as she is reborn time and again throughout history. The film has a great ending to this tragic love story. I sincerely hope that this film gets an Oscar nomination and a wide release in the North American market. Lightstar Studios has produced a powerful and gripping film that hopefully will be part of my permenant collection one day.

While the previous list of films represent my favorites from the festival, they were certainly not all the films screened. A list of the shows along with trailers for all the films shown at WFAC 2013 can be viewed on their YouTube channel.

Once again, Joe Chen and his intrepid band of volunteers brought a show well worth the three-plus hour drive from Michigan. The Waterloo Festival for Animated Cinema remains the festival that allows me to wrap up the festival season on a high note.
Posted by Charles Wilson at 12:00 AM 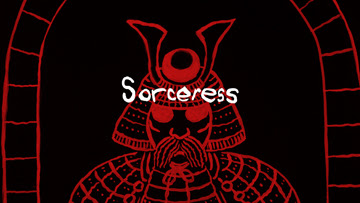 Here's an exciting treat for everyone: today, Canadian animator Patrick Jenkins has posted two of his NoirLand films online for viewing on Film Annex.

I've purposefully not embedded his films 'Sorceress' and 'Labyrinth' as I hope that you'll navigate to his Film Annex page and watch them there. On his page, not only has Patrick embedded images from 'Sorceress', but he has also embedded 'Labyrinth' in addition to a list of links to other posts he's written that describe his paint-on-glass technique.

If you'd like to watch the two NoirLand films in the order that they were released, watch 'Labyrinth' first and 'Sorceress' second.

Lastly, this past February, I posted an interview with Patrick which can be read here.

Posted by Charles Wilson at 9:44 AM

"A mediocre person tells. A good person explains. A superior person demonstrates. A great person inspires others to see for themselves."
~ Harvey Mackay
Posted by Charles Wilson at 12:00 AM No comments: