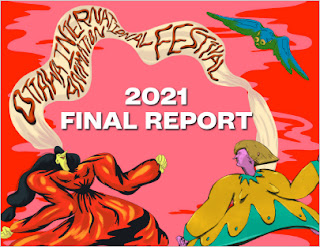 So last fall, the Ottawa International Animation Festival changed the format for their Festival program book. In the past, they offered print versions for the in-person event, and some years even had PDF versions on Issuu.com so you could download and read them after the fest. Since 1994, I've been maintaining an archive of these program books. Some have had additional material, like interviews and articles, but all have had listings of the films in the competition and retrospective screenings--along with their creators' names and companies.

In 2020, since we were in lockdown, the OIAF uploaded a PDF version of the program book for the online festival--which I immediately downloaded, printed, and had coil bound. This was mainly for my archive but also so I could peruse it during the online screenings and write down the names of my favorite films, or the ones that I wanted to see again, or make a list of animators whose work I wanted to explore in greater depth.

Unfortunately, last year's online festival saw them move to a different website format and they didn't issue a program book. All the screenings and festival information was on the website but the site itself was pretty clunky with regards to locating the film and animator information. After the festival I had planned on making my own program book. Unfortunately, it would've required a lot of copy-and-pasting. But, it would've been worth it just to have that information.

Well, time dragged on and I got busy, so by the time I was ready to commit to the task, the festival had migrated to their new website and a lot of the information simply wasn't available anymore.

However, having attended the OIAF for twenty-eight years, I've gotten to know festival Artistic Director Chris Robinson. So I shot him a quick e-mail asking if this information would be archived and presented anywhere in the future. Within a couple hours, Chris e-mailed me a link to the Festival's public final report for 2021. And while it wasn't a program book as I had seen them in the past, it had all the information that I was hoping for!

As it's now been printed, coil-bound, and inserted into my archive, clearly, it was well worth taking the time to ask.