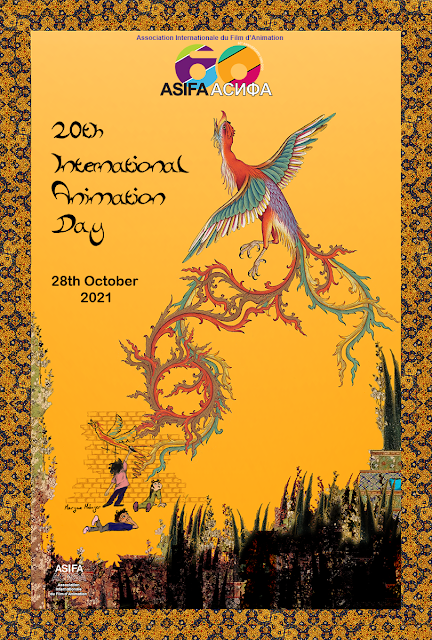 Happy International Animation Day--the day where ASIFA chapters all over the world celebrate the birth of animated film! The image above is the 2021 IAD Poster created by Maryam Mohajer.

Well, due to the ongoing plandemic, I was stuck in the States for another Ottawa festival. Fortunately, the OIAF made the decision to host the festival online for another year. Unfortunately, while this year did provide a few opportunities for reflection, it had left me with some disappointments.

Disappointments like when planning next year's trip (hopefully), I made the unwelcome discovery that Marche in Toronto had closed shop for good. On the one hand, I can't be too angry as it looks like the parent company had planned on closing all their locations in Canada and leaving North America prior to the outbreak. Still, it was one more prominent landmark from my childhood that is now gone. I don't see the ROM, the CN Tower, the Science Museum, or Casa Loma going anywhere though. So, there are still some "historical" sites with good memories to match up with the new locations that I've discovered over the years.

And the part of the festival that I've come to look forward to the most is catching up with fellow RIT Alums Glenn and Sarah (they were first year grads in the same program when I was a third year grad). But, can't do that when we're all stuck at home (a Zoom meeting room just isn't the same as being there in person).

On the bright side, like last year, the OIAF had extended the festival to two weeks so attendees all over the world (read that: across different timezones) would have time to see everything that we wanted. Personally, I enjoyed racing home from work to cook dinner and watch the evening screenings during the first week of the festival. Downside is that I got sick during the second week of the festival, so, I was bedridden for almost the entire duration of my week's vacation. There were two bright spots though: one, I just wheeled my laptop into my bedroom and listened to all the panel discussions and presentations--so I didn't miss a bit of the festival. Then I'd shuffle downstairs and watch the screenings on my television later in the evenings. The other, well, since my illness is a chronic malady that I've had for decades, I did some more digging on the Internet and found a natural remedy that seems to alleviate some of the symptoms. Didn't cure it outright, but it reduced the pain significantly and cut down the time I was laid up, so it was worth the time spent in research as the doctors and specialists I've seen in the past have had no solutions.

Though probably one of the biggest disappointments this year though was that there was no 'program book' for the festival. For whatever reason, the OIAF had all their information about the festival and films online, loaded onto a website that wasn't that easy to navigate, whereas in the past it was either printed or on a PDF that we could download and follow along during the screenings. To make this clear: I have saved all my festival readers & program books since the first one I attended in 1994 (and I even have a program book from the one OIAF that I've missed). But, so as to not be defeated, I printed out the 40 Years of Ottawa collection of essays document that they released in 2017 and had it bound. It was a little bittersweet as I read the sections that Jacques Drouin authored since he had just died, but I did enjoy the essays written by animation luminaries, a number of which have become friends and professional acquaintances through the festival.

No, for the week that I laid there in bed, listening to the panels and presentations, I mostly stared at the ceiling and processed information in search of inspiration, or something thought provoking--like from the following:

I thought the tests that they did before pre-production were fascinating: especially figuring out how the lighting interacted with the different set and background materials, as well as the motion tests they ran when they were figuring out how the models should move. It's something that I hadn't thought of during my small forays into stop motion. Usually, I'm just trying to figure out how to reduce/eliminate that damned flicker that shows up from frame-to-frame!

Another profundity was when they talked about how some actors' performances didn't fit within the physicality of the puppet: "finding a voice that fits within the physical puppet." Having experienced this difficulty when watching certain English dubbed anime, it's one that resonates with me -- sometimes the voice actor is just out and out wrong for the character (especially when compared to the original voice actor.

The Making of Pixar’s SparkShort Nona

I loved the attention to the different frame sizes that they displayed during the film: in the real world, the TV world, and the playtime world (4:3, 1:185, 1:235 etc.). It was one of those little details that geeks like me would notice.

'The Sparkshorts program is looking for good storytellers not just scriptwriters.' This hits pretty close to home as one of the things that Erik stressed (in his scriptwriting class and in other classes) was to learn how to tell a good story. One of his little nuggets of wisdom was: 'you can make a film worth a million dollars using a software program worth ten dollars. And you can make a film worth ten dollars using a software program worth a million dollars'. Story is key.

'A single film runs for six months of production time.' My thesis took one year from start to finish, but I was working a full-time job at the same time. I'm willing to bet that if I had nothing to do but work on my thesis, six months to complete it would be pretty accurate. Still, to produce a film with at the production quality of Nona, it still impresses me that they can get it all done in six months.

My Career as a Storyboard Artist

- "If you don't get that storyboarding job you work on your own stuff... study film... Geek like crazy." ~Bradley Cayford

- "Really hit the 'friends in the industry/professional network' pretty hard..." (was happy to hear that since I encourage networking to all the kids I meet who want to be animators) "...and studying film." -- Kubrick was the example José gave.

José really made me want to go back and review my books on editing and Soviet Montage theory that we read during Grad School.

Well as the week started to wind down, I felt well enough to venture outside my home. Since I hadn't been able to do any of the usual things like have a nice meal at a decent restaurant, I decided to end the week with a trip to the Detroit Institute of Arts. I didn't mind the reduced numbers of people there, made for a much more peaceful visit, but they shut down the cafeteria, so having lunch there wasn't in the cards. However, there is always something special about spending a couple hours surrounded by art and architecture that feeds my soul. And I left Detroit feeling refreshed. Though as I drove home, I was struck by the thought so common to many nowadays: "hopefully next year will be better." 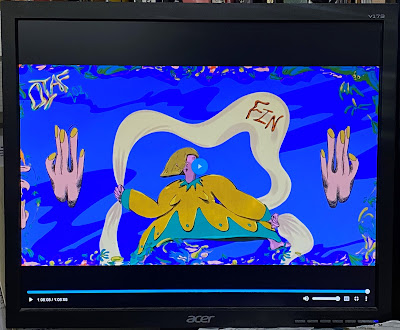