A Year of Animation: Jack Slutzky

During Grad School, three of my favorite classes were the Intro to Classical Animation classes that I took with Jack Slutzky.

Prior to his tenure at R.I.T., Jack worked for two years at Disney under Snow White animator Shamus Culhane. During class, he would tell us the odd story of time spent with Culhane who, as Jack put it, was driven to near alcoholism while animating the famous "Heigh-Ho" scene from Snow White as he dealt with puzzling out the technical aspects of drawing seven near-identical characters marching in lock-step and yet trying to ensure that they all had their own unique personality and movements.

Jack would later become one of my three thesis advisors and the one who would provide the most help as I struggled through the trials of trying to complete a hybrid hand-drawn/digital animation when I had only really been animating (or doing any serious drawing) for two years.

As I've been going through my filing cabinets to reconstruct (and archive) my animated films, handouts, and notes from Grad School over the Summer, for this month's animation, I decided to use DragonFrame to recapture and retime several animation assignments from Jack's first class.

This first assignment was designed to get us warmed up to hand drawn animation by taking a stack of notecards and creating a pair of metamorphosis animations between a pair of shapes.

Then, Jack had us create a title animation for a fictional company of our own devising which we could use at the beginning of future productions in his class.

The last "animation" assignment we did was to animate a person laughing. Jack provided us with some keyframes for reference material and it was up to us to redraw the keyframes then figure out the in-betweens and animate them.

Jack was a fount of valuable information during my thesis. When I mentioned how I was struggling with drawing my scenes, it was Jack who suggested I draw fifty poses each of my two characters every day before working on a scene. That turned the trick. Within a few short weeks, my creative block was shattered and I was barreling through my thesis. The point that he was getting at through that particular exercise was how I needed to know my characters in far greater detail. And by doing multiple drawings of various poses, I could study them from every angle, every expression, even practice their body language. At that point in my thesis, I was trying to run, but I had barely begun to crawl.

After completing Jack's third Introduction to Classical Animation class, he wrote me the following note.

I saw Jack at Erik's memorial service and spoke to him a couple times afterwards. The last time we exchanged e-mails, about a short animation I had just completed (Stress), he encouraged me to never stop looking at my work with a critical eye and striving for greatness in my animation:

Thank you for sharing your animation with me. I thought for a second I was back at RIT. It was a pleasant surprise seeing you at Erik's memorial service. You look well, and from what you said, and i've seen you're moving on into the future. I wish you luck.

My only criticism of the work you shared with me, including the tape you sent, is your characters are one dimensional. Yes, they move, but with no sense of life. Timing, aceleration/deceleration, speed change, etc. Do more, don't just settle for movement, give me movement that means something. You are too talented to settle for less. End of crit, I'm not your teacher anymore, just a friend.

Hope Ottawa was beneficial, and enjoyable. Lookin forward to being there in two years. I'll buy you a drink and we can toast to old times.

On Thursday, April 28, 2016 at the age of 78, Jack died at home with his family. He left behind a loving wife and family and a legion of students who learned great lessons about animation under his steadfast guidance.

Summer seems to be the season when people say that they're catching up on their reading. Personally, I always thought Winter was the season for catching up on your reading since you'd be stuck inside due to the inclement weather, whereas during the Summer, you'd want to be outside. Humans baffle me...

Anyways, I don't really have a Summer reading list as I try to read throughout the whole year, but these are the books that I'm currently reading and trying to finish by the end of Summer so I can bring something light to Toronto and Ottawa this Fall... like a paperback... or maybe Zoran Perisic's book 'the Focal Guide to Shooting Animation'...: 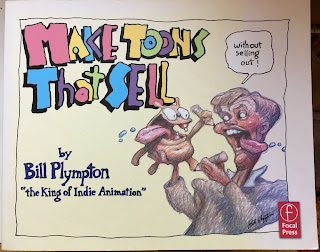 Make Toons that Sell Without Selling Out
by Bill Plympton 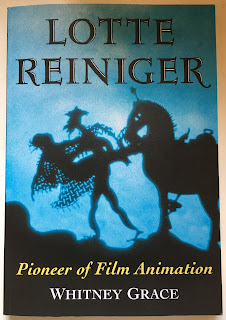 Well, last night was like Christmas and my birthday all rolled into one.

For weeks I've been trying to do a sector-by-sector recovery of data from an old Macintosh formatted floppy disk and resigning myself to the fact that I'll probably have to pay to have it professionally done--if there's anything still on that disk at all. It seems that whether I use the tools on my Mac or on my PC, the physical disk simply will not load.

Well, last night, I was poking around some deleted files that I recovered from another disk and not only did I find two lost papers from my 3D Animation I class but the term paper from Stephanie Maxwell's Film History class that I thought was gone for good (and that I thought was locked away on that floppy disk, given what I had written on the label).

Then, when scanning in my handwritten notes from the Film History class, I came across a reference to an additional book that Stephanie recommended we read. I look over to my left and realize that I bought it at a garage sale for $.50 over a decade ago without even remembering what connection it had to her class.

This grad school archival project has been one unexpected blessing after another. At this point, between all the stuff I still have (paper copies of notes, drawings, and physical models), the videos of animations I produced, and the films that I've rebuilt from either my notes or my original material, I think I will have recovered almost 99% of what I lost by the time this project is done.

The only thing I can't recover is my Computer Music project because all of that was on a Zip Drive that I handed in to the professor during class which he accidently lost back in '96 (though I am still holding out hope that I might still have the cassette tape with my three songs on them).
Posted by Charles Wilson at 12:00 AM