So for you folks who are into the French Impressionists like I am, the Detroit Institute of Arts currently has an exhibit highlighting a series of Claude Monet's paintings which were created during a short period of time (around the early- to mid-1870's) at his home in Argenteuil  and accented by paintings by Pierre-August Renoir completed around the same time-frame. 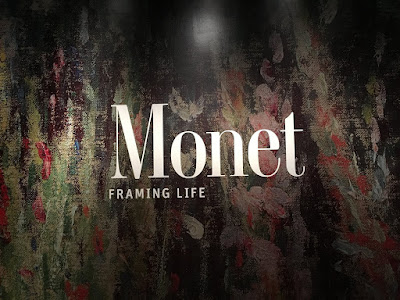 Titled Monet Framing Life, this exhibit opened on the weekend of October 22nd, 2017. Tickets for adult admission cost $16, but is free for we members of the DIA (enter shameless plug for DIA membership here).

'Framing Life' has as it's centerpiece the DIA's own Monet painting "Gladioli"--which served as the figurative focal point for the paintings in the exhibit. All the paintings are centered around the time period that Gladioli was painted and highlight the scenes that Monet would have seen in Argenteuil during the few short years surrounding the creation of Gladioli.

The following are just some samples of the paintings included in the exhibit. And while I could show them all (non-flash photography "is" allowed in the exhibit), I really don't want to detract from the experience of seeing these paintings in person--partially because if the DIA makes money on shows like this, it will encourage them to bring in more, and partially because you just can't truly appreciate these paintings through a photograph on a website. You really need to see them in person. They're not behind glass (though the security guards are very vigilant at preventing people from getting close enough to set off the alarms or damage the paintings with an errant sneeze), the lighting is very suitable for viewing the paintings, and there's just something special about being able to study a masterwork from different viewing angles. All three times I've gone through the exhibit, I've picked up something different each time ranging from the angle of the brushstrokes to the choice of colors used to show the range of light and shadow to the different expressions on his subjects' faces.
﻿﻿


I was very fortunate to attend a lecture during the exhibit's opening weekend presented by Jill Shaw, Associate Curator of European art (1850-1950) and the curator of this exhibit. Jill not only covered historical information about the paintings and Claude Monet during this period of his life, but she also delved into the forensic work and research into the history of the only Monet painting that the DIA owns (Gladioli)--research which prompted the DIA to change the name of "Gladioli" back to "Rounded Flower Bed (Corbeille de fleurs)".

The last thing I'll share is the exhibit catalog. Written by Jill Shaw, the information contained therein covers much of what she discussed in her presentation during the members preview weekend lecture I attended.

It's only $20 and not only does it contain beautiful photos of the paintings but it also puts the paintings in their historical and geographical context before launching into a section discussing the history of 'Corbeille de fleurs'. It was this section that I found most interesting, especially in the greater context of the exhibit. The final painting in the exhibit is the newly (re)christened 'Rounded Flower Bed'. However, as opposed to being wall mounted like the other paintings, Rounded Flower Bed is mounted vertically in a glass box that allows one to see both the front and the back of the painting--including stamps and handwriting which were used to backtrack the history of the painting.


Upon my third visit to the exhibit, I did something a little different. Since 'Monet - Framing Life' is small, lightweight, and only sixty-four pages long, I took it with me into the exhibit and walked from painting to painting while reading the first half of the book. Doing so added an additional dimension to my enjoyment of the exhibit as I wasn't relying solely on the placards or on my memory of Jill's lecture to provide context for the paintings.

Given that I'm more of an auditory learner, if one was offered, I would have loved to take an audiobook through the exhibit so I wouldn't have to split my focus between the painting and the text. The Art Gallery of Ontario currently has a display on the horror films of Guillermo del Toro and he produced a series of short podcasts that you can download and listen on your smartphone while going through the exhibit. It's these value-add propositions that I think really breathes new life into museums as well as expands their educational offerings. They have been using audio guides for decades after all. That and the DIA is already experimenting with augmented reality on smartphones. Ah, Google Glass, you missed your calling. 'Augmented Reality museums'. It could have been the wave of the future!

Well, this exhibit is available to the public right now but will close on March 4, 2018 and the paintings will return to their respective owners, so I would visit the DIA to see this exhibit sooner rather than later.

The Detroit Institute of Arts is located at: 5200 Woodward Ave., Detroit, MI 48202 and tickets for this exhibit can be purchased either onsite or on their website.