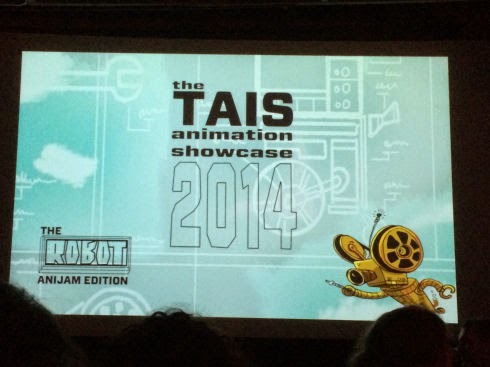 A month after TAAFI, it was time for the Toronto Animated Image Society's annual screening.

This time, I was fortunate enough to get one of the rooms that the Novotel holds in reserve for Expedia.com. Fortunate in that Radical Sheep Productions is only one block away from the hotel.

Okay, background is necessary. At TAAFI, I asked Michelle Melanson-Cuperus for permission to record the WiA roundtable discussion. I wanted it for personal reasons, but also because I believe that every time Women in Animation does an event like this this--where they have women animators discussing their careers--it should be recorded and put up on the website as a value-add for members (and would become a valuable resource for researchers). Well, after multiple fiascos of me trying to e-mail/Dropbox/Sendthisfile the audio file to Michelle, I just burned the files on a CD-ROM and figured I'd drop it off at her office.

The drop off went well. Unfortunately, I missed Michelle by 15 minutes. So, undaunted, I went book hunting instead and found a copy of "A Century of Stop Motion Animation" by Ray Harryhausen... 240 pages and only two pages reference Virginia May, one of the first woman animators! Kind of typical I suppose, but am still glad to have that reference material in my library. As good as the internet may be, Toronto remains one of my best sources for finding used books.

Later that evening, I met up with fellow TAIS member and former woman animator interviewee, Janice Schulman, for dinner. Was a fantastic evening! The conversation ranged from her new projects and inspirations for her old projects, to funding sources in Canada, freelancing, and TAIS and WiA project development. One of those nights that you wish could go on a lot longer... or at least could be transplanted to Michigan!

The next day found me visiting the Royal Ontario Museum as they had a special exhibit on China called 'The Royal Family of the Forbidden City'. There were a lot of objects on display ranging from tableware to ornately embroidered robes to military garb, bells, and paintings. But what was of particular interest to me was how the curators had integrated animation into the exhibit. There were several worthy of note: the first was a multi-panel video display that depicted the emperor and his entourage being led into the Forbidden City via a military procession--all painted on a handscroll--which can be seen at time marker 1:38 to 1:43 in the YouTube video below. As you looked closer, the figures in the painting would move as it slowly panned across the scene. The other videos were in adjoining rooms and they depicted the daily life of the Emperor and the tale of a Chinese citizen advancing in social rank. Both stories were presented in a black-and-white silhouette animation style that mimicked traditional Chinese shadow-puppet theater. Unfortunately, as cameras were not allowed in this exhibit, I was unable to record any footage of these last two videos.

Shortly after leaving the Forbidden City exhibit, I made the rounds to capture some visual references for future art projects. As fate would have it, Lynn Dana Wilton was in the prehistoric mammals room with a friend, doing some drawing before the TAIS screening.

Not one to miss an opportunity to screw with Lynn, I took a candid photo of her and Vickie, then sat down on the bench next to them--waiting for a moment to enter the conversation and reveal my presence to the two animators who were intently drawing a fossil. The joke paid off rather well a few moments later--though now I'm left wondering how Lynn is going to get me back...

That evening, Madi and the TAIS board tried something new as they held a barbecue in the back lot behind the Cinecycle before the screening. It was a great decision as it really promoted a sense of camaraderie between the attendees and provided an opportunity to network with our peers. Though afflicted with social anxiety, I still had the opportunity to chat with Lynn, Madi & Tom, Hugo, Patrick and Bryce at the cookout before the films were shown. Fortunately for me, the back lot never got so loud that I could not understand what people were saying--regrettably, a problem that I've had my entire life which usually forces me to retreat somewhere quiet in order to refocus my thoughts. Needless to say, I find museums and libraries much more enjoyable than the club scene.

The screening was a mixed bag. This year, the AniJam subject was "Robots", which I had a lot of fun with and figured that many people around the world would too. Unfortunately there weren't many submissions this year.

I hate to say it but even though I very much enjoyed Patrick Jenkins' new film Circle Game, I found the rest of the program to be a touch underwhelming. There were just too many non-narrative, abstract films.

One thing that I was pleasantly surprised by was that the film selection was almost equally split between films produced by woman animators and those produced by men. And there were a couple standout films in the selection, like A Life With Aspergers by Jamie Ekkens, Blackout by Sharron Mirsky, Choir Tour by Edmunds Jansons, and Robin by Yuval Nathan. But overall, the selection left me feeling crestfallen. As the TAIS screenings have been moving in this direction for a while, one where films with cohesive narrative structure appear to be eschewed in the name of those with eyestrain-inducing visuals, well, I'm sorry to say that I'll probably think twice before I go to another TAIS screening. Animation is a visual medium and I expect to see well produced abstract animations (like Circle Game or Robin), but to program your screening in such a way that the number of abstract films drastically overwhelm the narrative? Unless it's a program specifically designed for abstract films (like the one held by the Ann Arbor Film Festival every year) then it's just not for me. It would be different if I lived in Toronto, but when you have to shoulder the expenses of a nine-hour round trip visit, one has to wonder if you're allocating your resources as wisely as you could be. Looking back on the experience, I think that I'd be better off reallocating that money towards attending the TAIS workshops instead and really sharpening my skill-set.

The following day saw my first visit to the new TAIS offices--and I was duly impressed. TAIS continues to flourish under Madi Pilar's leadership. Though a bit out of the way from what I'm used to with the old location, the new office has multiple workstations suitable for digital filmmaking, stop-motion puppetry, and under-the-camera techniques along with a small library and conference area. As Bryce Hallett continues to teach hand-drawn animation workshops, I look forward to taking one of his classes in the new building in the future.

Afterwards, I went to visit Patrick Jenkins at his studio to see the progress on his latest Noirland film. Patrick continues to push beyond the boundaries of what he has produced in the past using the paint-on-glass technique, seen in his previous films Labyrinth and Sorceress. Every time I visit Patrick and see his film continue to grow and coalesce under the camera, I leave his studio encouraged and looking forward to the day when I get to see it on the big screen. If you haven't seen them yet, the first two films in his Noirland series are available for free viewing on page 3 of his section of the Bitlanders website. 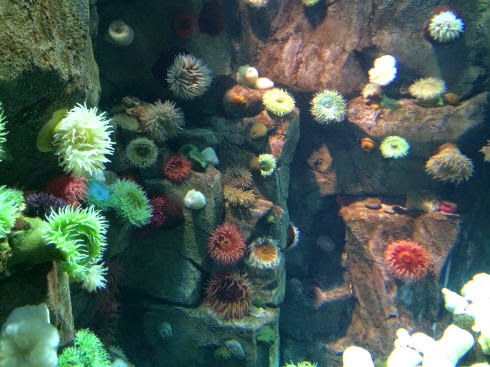 As it had just opened up, I couldn't leave Toronto without visiting the new Ripleys Aquarium  adjacent to the CN Tower. It appears that no expense was spared when building this new attraction. As you walked through the aquarium, they had the traditional 'fishtank-style' exhibits as well as a moving sidewalk that took you though an aquarium, though you don't realize that you're surrounded by water until a shadow falls over you and you look up just in time to see a large shark or stingray swim overhead. I especially enjoyed the horseshoe crab and shark petting ponds, even though I spent considerably more time photographing jellyfish as they drifted along. 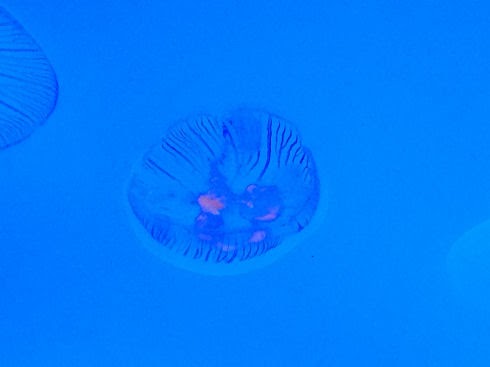 I would love to see the Ripley's Aquarium added to the sites available through the Toronto CityPass system--especially given that the Toronto Zoo is outside of the downtown Toronto area and the Science Museum is more geared to families with little kids.

Well, no Summer trip to Ontario would be complete without a visit to Niagara, so on my last day, I drove down to the Falls. Unfortunately, they didn't have a fireworks display that night, but I still got some great photographs while I was there. 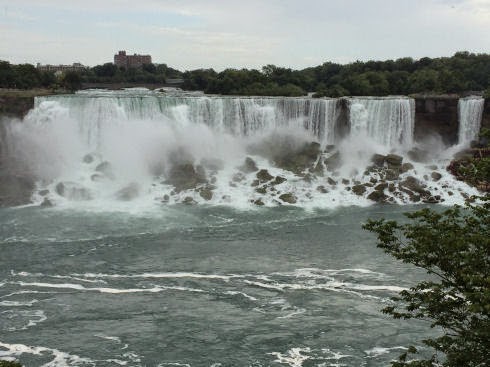 The next day, it was time to go home to Michigan, but I didn't want to leave Niagara without a quick side-trip to the best Butterfly Conservatory in the Great Lakes region. And I even found time to make a new friend. 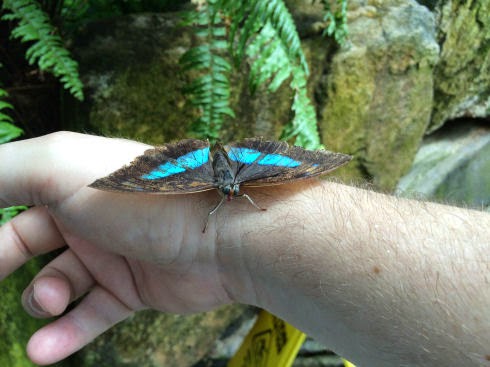