I received a call in February from a student at R.I.T. He was making the rounds, calling alumni for donations. And while I wasn't able to give at that moment, I assured him that in March, I'd have a check sent out to R.I.T. for the Erik Timmerman Memorial Scholarship. But one of my statements surprised him greatly. When this young man asked me what I thought of my time at R.I.T., I simply stated that it was the greatest three years of my life before or since. Y'see, it was at R.I.T. that I grew the most as a human being. It was at R.I.T. that I met four people who would have a profound effect on my life--two during my time there and two afterwards.

I almost didn't go to Grad School. My grade in my major was a solid 3-point-something. However, my overall GPA was closer to 2.5-ish. But I had been working on little animated films with my friend ChuckBill and had written some short stories, all of which I sent on to Erik Timmerman. The story he told me when I started grad school was that there was some serious debate as to whether or not they would accept me in the M.F.A. Computer Animation program. Given my grades, the board wasn't sure that I could handle the workload--especially given that I'd be moving from a semester system to the high-pressure quarter system that R.I.T. uses. But, as Erik told the story, he said to the board: "I've talked to this guy and read some of his writing, he can handle it. Let him in." And I was accepted to the roller coaster ride that was grad school.

Erik Timmerman was the first 'father figure' in my life who believed in me. Erik made me feel like I could accomplish anything. He was loud, in your face, and bombastic--but he never gave me any reason to think that he didn't love me, didn't believe in me, didn't think that I couldn't accomplish anything I put my mind to--and I loved him for it. Erik was honest with me about my failures. When I was overreaching, he'd tell me so and then would help me bring my imagination back into the scope of what my skills could accomplish (with just a little extra above the bar so I would reach higher, stretch, and grow both as an artist and as a person).

As I approached graduation, Erik paid me perhaps the greatest compliment he could have--he pulled me into his office and said that he was going on sabbatical for medical reasons. R.I.T. was looking for someone to take over for him while he was gone and he said that I should throw my name into the ring. Well, I'm ashamed to say that I never did. Although I knew the material, I didn't think that I was experienced enough to teach his classes. Erik said he understood and smiled at me in that way that he always did, the way that communicated, "you might not think you're ready now, but I think you are, and I think that when you're realize that you're ready, you're going to be excellent." 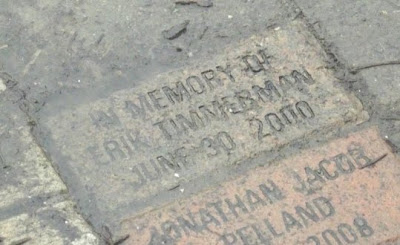 Erik once told a classmate of mine that Spring was a sad time of year for him. As Elouise would later write in her blog, Erik said that "Every year, all these students leave...and I am still here. I don't think they remember me."

Erik was the man who taught the first animation class at R.I.T. He was the man who started the computer animation graduate program at R.I.T. And he was the man who gave many students a chance to live their dreams. One day, Erik may well just be another name on a memorial brick and a footnote told to students on their first day in the animation program. But his presence will continue to be felt by future generations of animators who graduate from R.I.T., whether they knew him or not. 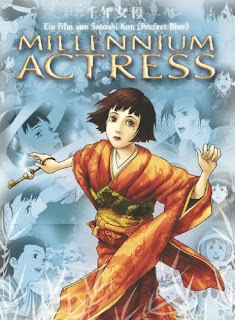 It's always sad when people pass away, but it hurts doubly so when it's a gifted member of the animation community. Today, anime director Satoshi Kon passed away in his home at the far too young age of 46. Kon was the director of several animated films including "Perfect Blue," "Tokyo Godfathers," "Paprika," and "Millenium Actress."

I first encountered his work when I purchased the initial release of "Ghost in the Shell: Innocence" at Best Buy and it came in a shrinkwrapped 'double feature' package with "Millenium Actress." After getting my GITS fix, a few weeks later, I watched "Millenium Actress" and was transfixed by the ingenuity that I saw on the screen. The story is about two documentary filmmakers who are interviewing a famous actress nearing the end of her life--a time when her career had been over for years. Satoshi Kon found a way to integrate the actress and the interviewers into the flashback narrative structure that kept the story from becoming an endless series of flashbacks bookended by talking heads. While perhaps not one of his more well known films (due to it's non-traditional, non-typical Anime story), "Millenium Actress" set the stage for his 2006 film "Paprika," a mind-bending, visual feast of storytelling that proved how Hollywood should be looking East for inspiration and more complex storytelling.

Satoshi Kon died before completing his film "The Dreaming Machine" and the world of Animation lost more than a director, it lost a true visionary whose films rank on a level with Katsuhiro Otomo, Osamu Tezuka, and Hayao Miyazaki.
Posted by Charles Wilson at 3:00 AM 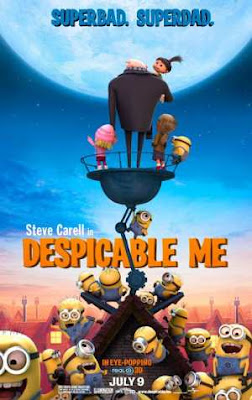 I'm going to preface this review with two facts about myself:
1. For years, a running joke I've had with my friends is that when I grow up, I want to be a supervillan so diabolical that the U.S. Government would gladly pop a nuke on American soil to get rid of me. Yep, I grew up reading a lot of comic books (that are all currently bagged, boarded, and cataloged for the eventual day when I either give them to my kids or donate them to a library).
2. I have never had the desire to bring a child into this world. Ever. But rather, I have longed to be in a place where I could adopt a couple of kids. Don't know why I feel that way, that's just how it's been for as long as I can remember.
So. As I'm sure you can imagine by now, "I" was the target demographic that the directors were thinking of when they made this film.
I've watched 'Despicable Me' three times now--twice in 3D and once in 2D, once by myself, once with parents and sibling, and once with parent and two nephews under the age of 10.
Each time I watched the film, I laughed, I cried, I marveled, and I reminded myself that this film was animated by the same French studio that brought us the surprisingly decent 2008 film Dragon Hunters (based on the animated series of the same name). 'Despicable Me' is the first feature-length animated film from Blue Sky and Fox veteran Chris Meledandri's studio Illumination Entertainment and he opened with a strong success.
All told, as far as animated films went this summer, I liked 'Toy Story 3,' I really liked 'How to Train Your Dragon,' but I loved 'Despicable Me!'
One of the biggest surprises for me was that Mr. Carell's voice acting and comic timing in this film was supurb! I'll admit it: I'm not a Steve Carell fan. At all. Nothing against him, I just don't find him funny (and the fact that I lived through a real world version of 'The Office' for several years doesn't work in his favor). Needless to say, I was cringing when I heard who was going to do the voice of Gru for this film. But after the movie, I left the theatre extremely satisfied by Mr. Carell's performance and looking forward to the character and dark humor that his voice acting will bring to Gru in Despicable Me 2.
Another thing about this film that I loved was how Gru's three daughters weren't caricatures or exaggerations of children, they acted like little girls. I was giggling inside as I recognized bits and pieces of my friends' children in the dialog, mannerisms, antics, and actions of Margo, Edith and Agnes. And as the following trailer shows us: in the end, it's all about the minions!

At this point, enough people have posted reviews about 'Despicable Me' and it's story, so I won't waste anyone's time with another breakdown on character and plot points. Rather, I'm going to link to a pair of articles found on Animation World Network's website. Both interviews discuss the ins and outs of producing this film, which I hope students looking at a career in animation will find useful.
The main point that I think we should take away from these two articles is that there is no singular way to take your education and experience and get your films produced. As animation students look towards an uncertain future in an uncertain economy, we should be continually learning from the examples of others and using their experiences to forge our own paths--and hopefully, the end result will be to see our own ideas on the big screen.
Posted by Charles Wilson at 3:00 AM

The Brothers McLeod continue to amuse me with the sometimes witty, sometimes slapstick mishap adventures of their short film character "Fuggy Fuggy" who continues on his never-ending quest to become a Ninja. Here we find our intrepid hero(?) coming up with an unorthodox solution to a difficult problem. As is usually the case, Fuggy Fuggy often finds himself in situations where, at first glance, the solution is straightforward. However, as is often the case, things don't turn out the way the progagonist expects and he either resigns himself to his fate and tries again, or gets comically frustrated and tries again.


In that regard, Fuggy Fuggy reminds me of the vaudeville-style Looney Tunes characters (Daffy Duck, Wil-e Coyote, Yosemite Sam, Sylvester the Cat, Porky Pig, etc), especially from the Chuck Jones-era of cartoons. While it's not a 'principle of animation' per-se, Fuggy Fuggy shows us how "characterization" is very important in animation. At their essence, the Fuggy Fuggy short animations are "gag" films. Like Wil-e Coyote and the RoadRunner cartoons, the story isn't deep, there isn't any major plot, just a series of jokes, gags, and pratfalls. However, it's the character that keeps us coming back. We identify with the main character and his frustrations and we cheer when he overcomes the challenges--laughing most when those solutions are as unorthodox as the challenges themselves.
Posted by Charles Wilson at 3:00 AM

Here's a cute little short produced by local Michigan animator Gary Schwartz and animated by a group of local teens. This film was created through ASIFA International's Animation Workshop Group and uses a variety of techniques from stop-motion and pixilation to hand-drawn animation.