Erik kept an eye on the players in the Rochester area.

Being as we were smack dab in the land of Kodak, Bausch and Lomb, Hewlett-Packard, and dozens of companies that served the imaging industry, it was natural that many of his students worked in the area--both before and after graduation.

One day, Erik mentioned a local multimedia company in Rochester that we should stay away from. He stated that some of the principles in charge of the company had a serious drug problem that led them to engage in questionable behavior like using company income to support their drug habit. His message received, we all looked for employment elsewhere.

A year or so later, one of my coworkers at the RIT Research Corporation took a job with that company. Who she hired on with was unbeknownst to me. At the time, all I knew was that she had left for a "better" business opportunity. Well, within about six months, she was rehired at the RITRC.

When I asked her what happened, she told horror stories of the company having money problems, unrealistic deadlines and expectations, a pattern of unethical behavior, and an overall toxic work environment that caused her to become so stressed that her hair started falling out. It turns out that the company was the one that Erik had warned us to avoid at all costs. While she and I were on good terms, we weren't exactly "that" close, so finding out all this after the fact wasn't out of the ordinary. However, I still wish I had known at the time where she was moving to, that way I could've passed on Erik's warning and saved her a lot of heartache. 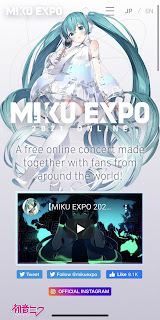 I admit it, I was on the fence when my friend asked me if I wanted to attend Miku Expo 2020 in Toronto. I wasn't sure that the Coca-Cola Stadium setting for the concert would be as good as the Sony Center--both visually and acoustically. And I wasn't sure that the musical selection could top the line-up that they played in 2016. That and I kinda didn't want to spend the money. But, I hadn't spent much time with him since he got married and had a kid, and it was Miku, after all.

So, I bought the tickets and booked the hotel and began the waiting game -- which in this case meant buying a couple t-shirts, the concert CD, some miscellaneous stickers and keytags, and a pair of the official multi-color glowstick/wand-thingiees. Eh, if you're going to eat a cheeseburger, eat the fuck out of it.

But as the lockdowns hit North America, the concert was postponed... and then rescheduled to the first night of the Ottawa International Animation Festival, much to my chagrin. But, as tickets were already purchased and I was committed to attending, we changed our plans to take two cars so I could drive to Ottawa after the concert and he could go home to Michigan. Then the US/Canadian border was shut down and the concert was cancelled entirely. After our tickets were refunded, we sat back and awaited word on what the Expo organizers would do next. Turns out they decided to crowdfund an online concert, which debuted earlier this month -- and it was AWESOME! 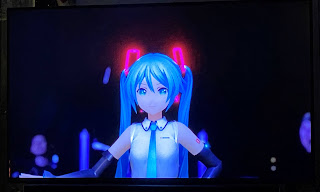 The setlist was filled to the brim with some classics and a number of new songs that I had never heard before. Personally, I loved how they opened with 'World is Mine', the first Miku song I ever heard and one of my favorites. And although it appeared to be a reduced setlist (16 songs in 2021 vs. 27 in 2016), they really seemed to get a lot of mileage out of the Crowdfunded budget that they were working with:

The Vocaloids were supported with an incredible performance by Rock Sakurai (bass), Masaru Angelo Teramae (guitar), Nao Nishimura (keyboards), and Junya Yamamoto (drums). I have to say that they were just as good as the 2016 musicians: Kensuke Ito, Tsuguhito Konno, Takahiro Misawa, and MEG.ME.

For this event, it appears that Crypton Future Media composited the live band with the animated characters as opposed to doing a live projection of the vocaloids on stage with the band. I didn't see the "Pepper's Ghost" projection screen between the camera and the band like it was in the live action performances. And there were a number of instances where the special effects took up a much larger screen space than the projection screen would allow (like in the below picture during the 'Alien Alien' performance). 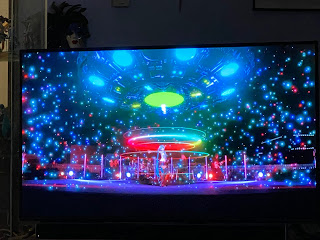 I actually liked this setup. Not saying it was any better or worse than the live action setup, but it afforded the animators some good options. They cycled through a number of camera angles during the show and adding shadows to the vocaloid models mapped to the stage did a very good job of building the illusion that the 3d animated characters were right there on stage with the band. When not done well, composited characters look like they're floating above the ground and it really pulls me out of the moment.

As mentioned, another thing that this performance model provided was the ability to expand their special effects. In the live performance back in 2016 at the Sony Center, there were physical props on stage that were also part of the set lighting, but anything digital was restricted to the semi-translucent screen upon which the vocaloids were being projected. So there was enough space for some creative special effects: digital wisps of smoke, some text, etc, however it wasn't as all-encompassing as it was during the 2021 show. 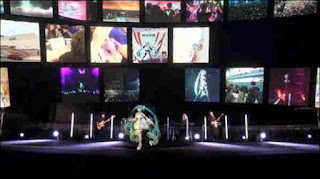 With regards to watching a show online vs actually being there... man, that's a tough comparison to make. Personally, I tend to avoid live music because it's so hard to enjoy the show when people are singing over the performer or drowning them out with their cheering and whistling. But that really wasn't the case with Miku Expo 2016. And while I really, really enjoyed watching the show from the comfort of my living room--AND being able to hear the music clear as day--there is an energy that you get from being part of the crowd that I didn't feel during the online Expo 2021 performance. I like to think that they made up for a lot of what was missing in the live performance by making the online show more visually engaging with the extra special effects animations. But at this point, it's really hard to compare the two experiences since the positives and negatives of both forms of performance balance each other out. 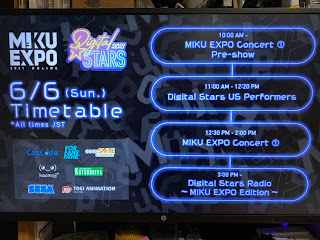 Another pleasant surprise was the opening acts. I honestly don't remember much at all of the American band Anamanaguchi's opening set at Miku Expo 2016  (I do distinctly remember that Anamanaguchi played the encore which included their song "Miku") and the rest of the 2014 "ARTPOP Ball" in Detroit was forgettable after Miku left the stage. I didn't catch a lot of the opening acts at Miku 2021, but the one that I did was solid. 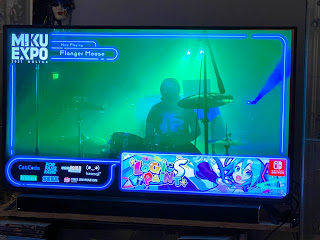 The songs I heard Flanger Moose performing were fantastic. I especially loved how he used a couple songs with non-Crypton Future Media vocaloid IA, like 'This Is Our Time'. I was able to Shazam a couple songs during the performance but am hoping to find a full setlist of the songs he played for the concert so I can listen to them all again. 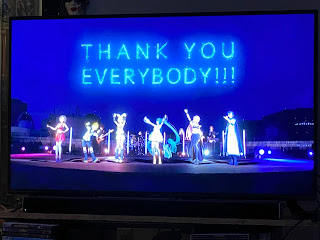 All-in-all, Miku Expo 2021 Online was an excellent experience that I'm looking forward to repeating. Hopefully, next time the show comes through town we can all see it in person again.