Normally at this time of year I would be traveling to Ontario for some much needed rest and relaxation in Toronto before making my yearly pilgrimage to the beautiful city of Ottawa for the Ottawa International Animation Festival. Yet along with the rest of the world I was stuck at home, tragically discovering that (like most introverts) my normal lifestyle was called 'quarantine'.

Fortunately, the fine people at the festival were working hard so that animation lovers all over the world could enjoy the festival. All of the events and screenings were moved online and the festival was extended from four days to two weeks so attendees would have lots of time to watch screenings and talks (and replays of talks).

Personally, I spent a lot of time looking for inspiration and motivation.

While I like to take daytrips to museums and zoos and the occasional 3-day weekend trip during the year for events that are usually animation or art-related (because, well, that's where my interests lie), my trip to the Ottawa festival is THE event that I look forward to every year. Taking some time off to explore Toronto and visit with friends for a couple days then enjoying the sights and sounds of Ottawa between festival screenings, it really recharges my creative batteries. While I split the nine-ish hour drive up into two parts on the way to Ottawa, I'm usually so excited and charged up that I make the whole drive home to Michigan in one day. Clearly, that didn't happen this year, so... looking for inspiration and motivation.

Over the two week span of time, I recaptured the experience by rediscovering and recreating some of the things that I liked (and missed) most about the festival:

So that I wouldn't miss anything, I went to FedEx Office and created a printed and bound copy of the OIAF Program book. Then made my own festival badge--gotta keep those collections current. 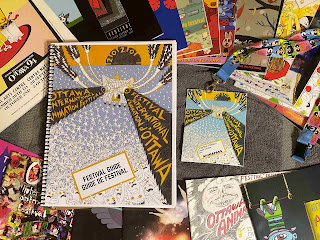 During what would normally be the Friday Animators Picnic hosted by Cartoon Network, I made some OIAF 2020 cupcakes. 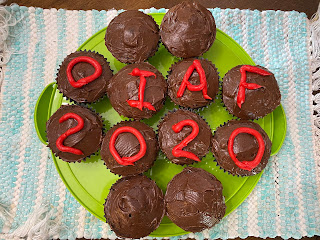 On Sunday, I found the only Dairy Queen in the Lansing area that serves a Cherry Arctic Rush (although apparently here in the States, it's called a 'Misty Slush'. Go figure). 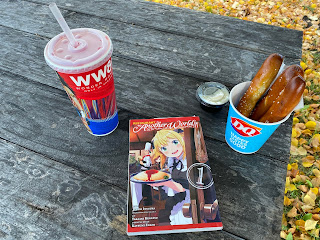 And in keeping with my usual "dining with something to read", I took my favorite light novel series to the local Chinese restaurant for dinner. 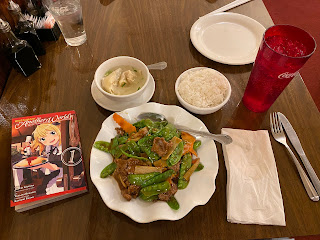 Well during the first week, I was kind of feeling that festival atmosphere and kind of not. So I decided to write down the pros and cons of the experience in hopes of getting a little perspective.

PRO: Not spending tons of money on travel and lodging.
CON: Between my housemate and my geriatric cat, it's so noisy during the day that I have to lock myself in my studio in order to watch the screenings.

PRO: I get to do things while I'm listening to the talks, like fold laundry and organize my desk and bookshelves.
CON: I'm not getting nearly as much exercise as I normally would while walking around Ottawa.

PRO: I don't have to deal with rude groups of people cutting in line while waiting to get into the theater.
CON: I don't get to see the films on a large movie screen--though my television is pretty choice, luckily it'll take an HDMI link from my laptop.

PRO: Lots of my favorite snacks which I can't take into the Bytowne Theater cause the wrappers make too much noise and I don't want to bother the other theatergoers.
CON: No big bags of Bytowne popcorn topped with freshly melted butter! :(

PRO: The festival has extended the OIAF by a week so I get to see everything I want to no matter when it's scheduled.
CON: If this freaking cat doesn't leave me alone, I swear I'm gonna...!

PRO: I can duck out for three hours and attend an online TAIS workshop on digital rotoscoping without missing any screenings.
CON: Y'know, there's no real "con" to balance that out. Through the miracles of modern technology, I can still experience events at TAIS and the OIAF instead of having to choose one and missing out on the other wonderful experience.

By Saturday's day of Professional Development events, I was in a much better headspace. So I started recording comments and thoughts that I found inspirational; like the following:

"At the end of the day, there is no experience wasted if you learn from it."
~Latoya Raveneau
Director, Disney Television Animation

"You always be humble."
~ Jay Francis (on breaking in to the industry)

"Act like a professional not a fan." - regarding internships
~ Maaike Scherff

"Quality over quantity. I have a small portfolio... You want your work to be consistent."
~ Marisa Torres

While home on vacation for the second week of the festival, I took some time between screenings and sifted through my big box of Ottawa Festival curiosities and found some fun stuff from the past twenty-six years. Lots of good memories sitting in that box just waiting to be rediscovered. 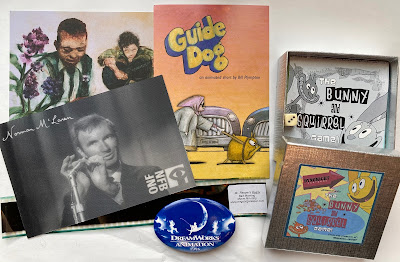 Treasures ranged from postcards to a 'Bunny and Squirrel' game that they gave out in the festival bags, buttons I picked up at the studio and school room on Saturdays, and even a film strip from Carole Beecher and Kevin D.A. Kurytnik's Mr. Reaper's Really Bad Day.

I didn't watch any of the features this year. None of them really spoke to me. I started one, but ended up turning it off about twenty minutes in, so the only reviews this year are from short films that I found inspiring.

I've really been enjoying Patrick Smith's series of replacement animations -- inspired by the works of Paul Bush, apparently. Well, his latest Beyond Noh holds a special place in my heart due to the fact that during pre-production, Patrick put out a call for photographs of any masks we had in our possession and apparently some of mine got included in his film.


KKUM, by Kang-min Kim was an interesting entry--the characters and sets for this stop-motion film were made out of big blocks of Styrofoam. It went on to win awards, and rightfully so, but the thing I remember most was Kang-min talking about his film after it screened and he warned the audience not to melt Styrofoam in a room with poor ventilation.


Women Undercover 'Yola' (Les esponnes racontent 'Yola') by Aurelle Pollet was a fascinating look at one woman's role in the Israeli spy agencies. I won't say more because you can watch the full episode in the embedded video above. But it's worth a watch not just for the story but for the graphic style of the film.


Bøygen was one of those abstract animated films that I found very enjoyable not just because of its own artistic merits, but also due to the fact that I taught a chapter on visual music in my Animation History class. Learning about the origins and history of visual music enriched my experience when I first saw Bøygen. As I watched the film, I was taken back to the works of Walter Ruttman and Oskar Fischinger. Would really like to see this film again in it's full-format, not just an excerpt.

It was a real treat seeing Burrow Madeline Shariafian's short film created through Pixar's Sparkshort program. Burrow is a cute film filled with cute little characters and very subtle wit. Would love to watch it again.

And then there was Jean Franscois-Levascue's stop motion film. It was awesome to finally see Jean-François Lévesque's film I, Barnabé. I had the privledge of visiting the NFB and having a guided tour of his set a couple years back. And not only did Jean-François show us models, sets and the lighting setup he'd assembled for his film, Jim Randall was also there with prototypes of the models he was building for I, Barnabé. And then, a couple weeks before the OIAF, Jean-François gave a presentation on the making of I, Barnabé at the online-version of the 2020 Montreal Stop Motion Film Festival--even though they didn't show his film! You can see the trailer on the NFB website, and hopefully the full film soon. It's a real treat!

I, Barnabé, Jean-François Lévesque, provided by the National Film Board of Canada

The last experience I tried to recreate was musical. At the festival, I usually hear a song that really speaks to me. Occasionally it's a song played during an animation. Mostly though, it happens to be a song that is either playing in the theater before the screenings or a song that was used as a musical score for the festival trailers or bumpers that play before and after the events. When I find a song that resonates with me, and the festival experience, I'll find it on iTunes and drop a buck or two to buy it and load it into a playlist for the drive home. You can experience this year's song embedded below on YouTube.

See you next year Ottawa (hopefully). 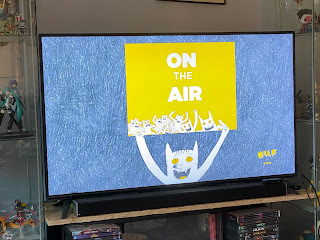