Animated Thoughts: Tales of the Night

It's been a decent year for animated feature films. Between the Detroit Institute of Arts Detroit Film Theater and my local theaters, I've been able to partake of a number of features in the first half of the year.

The first was Tales of the Night, by Michel Ocelot.

There's just something about watching a modern feature using an old-school animation technique, in this case silhouette animation. Make no mistake, this is a film for the younger kids and tween crowd, but there's still a lot there for us older fans to enjoy.

If you're interested, the following link is to the GKIDS webstore where you can purchase this film on DVD: "click me".

Next on my line-up was Danmachi: Arrow of the Orion.

This film takes place in the Orario setting of Is it wrong to try to pick up girls in a dungeon? series. And while there are appearances from our favorite characters in the Loki Familia, the story focuses mainly on the Hestia Familia. And while the story was a bit predictable, it was a fun look at the relationship that is building between Bell and Hestia along with some tantalizing hints of what's going to happen in the next season of Danmachi. If you're  fan of the series (and of it's spinoff Sword Oratoria), you'll enjoy Arrow of the Orion.

Then there was Mirai, the latest from Mamoru Hosoda, director of Summer Wars and Wolf Children.

Mirai wasn't bad... it was just a little too "kiddy" for my tastes. Is a good film for parents to watch with the pre-teen crowd. But honestly, I had more fun hanging out with fellow ASIFA member Gary Schwartz and his wife before the film than I did in the theater. I think that if I had kids, I'd enjoy the film more since there were a lot of events and situations in the film that I just couldn't relate to.

Well, with Studio Trigger's Promare coming up in September the week before the Ottawa International Animation Festival, the Fall looks to be a very animated one!


This year, the ASIFA Central retreat was held in St. Louis and graciously hosted by Webster University, home of our Social Media Coordinator: Chris Sagovac. After a joyful seven-and-a-half hour drive filled with discussions about animation and gaming with fellow ASIFA Central members Brad Yarhouse and Robert Sweringa, we arrived in St. Louis for a fun-filled weekend of animation -- starting with a meet-and-greet over dinner at Blueberry Hill between our members and Chris's colleagues and students from Webster. 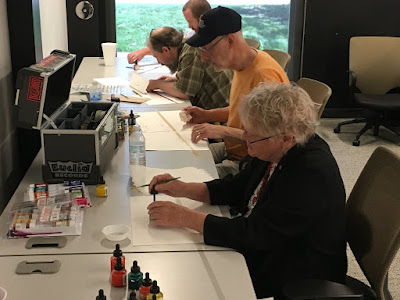 At one station, Chris had set up markers and ink with strips of clear 16-mm film where we could experiment with direct-on-film techniques. 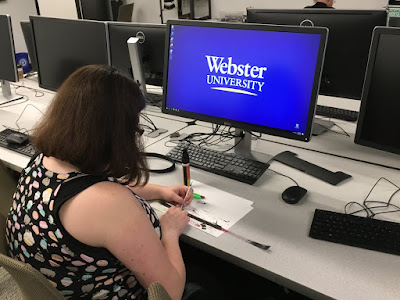 Additionally, in one of the computer labs, Steve Leeper demonstrated his Photoshop scripts designed to produce digital direct-on-film animation. Fortunately for me, I remembered my Adobe Creative Cloud username and password so Deanna and I were able to share a workstation and produce some short films using Steve's technique. I begrudgingly pay my monthly "rent" to Adobe for the Creative Cloud but I have to admit that it did pay off this time. 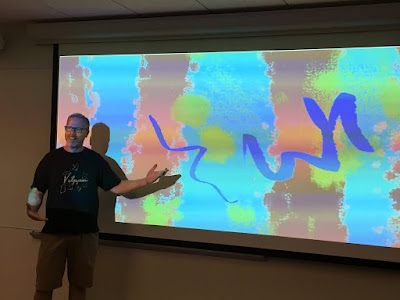 When finished, Steve compiled all of our films together for viewing later that afternoon. My section of the digital direct-on-film animation is below:


In the other room, a group of members and students were producing an animated film using the pixilation technique. Former honorary ASIFA President Norman McLaren would be proud to know that there are kids still using the animation technique that he used to create his award winning film Neighbors. 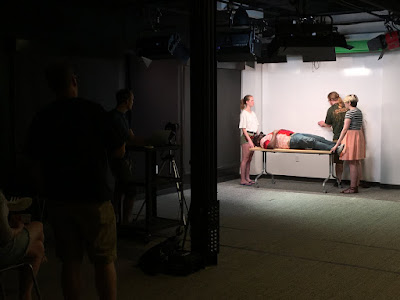 After a delightful lunch generously provided by Webster University, we devoured the yearly ASIFA Central cake, which miraculously survived the trip, and settled in for an afternoon of screening our films, Brad's update on International Animation Day, Deanna's update on ASIFA International, and a series of microtalks which included my in-memorium presentation of experimental animator Suzan Pitt and a very informative student presentation on Astro Boy. 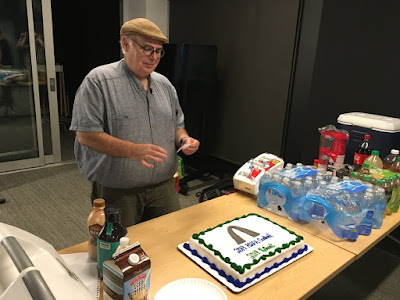 The next day, we packed up our cars to go home, but beforehand, we all met up for breakfast at the Highway 61 Roadhouse, another St. Louis landmark, for brunch and a little more community before making the hours long trek home.