Animated Thoughts: What are the odds?

Back in the day, I was visiting R.I.T. on my way to the Ottawa International Animation Festival. And as my former professor Jack Slutzky had published several books, I bought a copy of one that caught my eye at the campus bookstore on my way out of town. Over the years, I'd pick it up and read a couple pages when I had time, but eventually, I forgot where I set it down. It bothered me to no end that I couldn't find my copy of Mindscapes. I have one of his other books, but that was my favorite. I swear, it's in the house here somewhere, I just can't find it.

Well, after searching for years, I admitted defeat, hoped that where ever it was, it was being enjoyed, then I bit the bullet and bought a new copy... sort of. As it's been out of print for over a decade, I did a search on Amazon.com--where they had a used copy on sale for a very reasonable price. So, I plunked down the cash and waited for it to arrive.

It showed up a couple weeks early, on Friday of Hanukkah of all dates--an interesting coincidence as Jack was Jewish. Well, I opened the package and the book was indeed "used". It was pretty well used, as a matter of fact. Upon closer examination, it was a library copy--which explained the condition. I leafed through it to ensure that it wasn't missing any pages and discovered that it was from the Le Roy library in New York. The same city that Jack lived in. Another coincidence? Perhaps.

Then I looked at the first page. Written were the words:

"To the LeRoy Library
Thank you for being here"

Signed by Jack Slutzky himself. 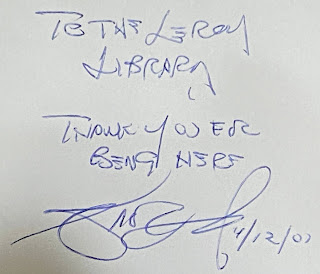 I quickly pulled out the hardbound copy of my MFA Thesis paper to compare the signatures on the page where my carefully selected committee had signed off on my thesis. Then I cross referenced it with a letter Jack wrote me several years after I graduated from R.I.T.

Sure enough, it was Jack's signature.

What are the odds that the book he autographed and donated to the library in the town where he lived would be blindly purchased at a used book sale on Amazon.com by one of his former students? And not just one of his students, but one of his graduate students for whom Jack served on the MFA graduate thesis committee?

Some see coincidence. Others see serendipity. I see providence.