Fall is upon us, which means that it's time for my yearly pilgrimage to the second largest animation festival in the world (largest in the Western hemisphere) -- as well as time for my yearly rambling blog posts about "what I did on my (working) vacation".

Well, no trip to the Ottawa International Animation Festival would be complete without a stop over in Toronto. So, I massaged my schedule such that I'd drive out to Canada on Monday morning and leave for Ottawa on Wednesday. Wouldn't have as much time on the shores of Lake Ontario as last year, but such is life. I enjoy every minute spent with our neighbors to the North.

It's been an odd year. For whatever reason, 2019 has felt really surreal, even moreso because it was the end of September and it was time for my vacation. As I drove to Toronto, it honestly didn't feel real, like it was still the beginning of the year and I was looking months down the road on the calendar.

But, time off is time off, so best to make the most of it. 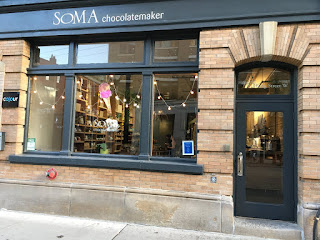 My plans for Toronto were to enjoy a "Best of" tour focused around the two Tasty Tours I did last year ('Chocolate Lovers' and 'Kensington Market'). So as soon as the car was parked and the suitcase was in my hotel room, I beat a hasty path to Monga Fried Chicken and Soma Chocolatemaker for a late lunch followed by hot chocolate and cookies for dessert.

Walked around town afterwards and found a good used book on origami at the ABC Book Store as well as some hard-to-find comics over at BMV Books for my old college roommate. Wish I could see the look on his face when he opens up his 'care package' from up North.


Stopped by Ginger for dinner and then curled up with the 'Origami Omnibus' -- visions of animating 3d CGI origami critters danced through my head as I drifted off to sleep.

I needed my rest, it was going to be a big day tomorrow. 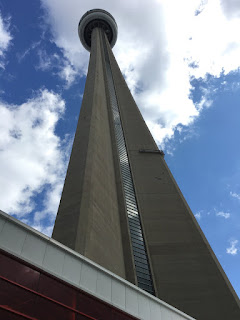 Sleep was fitful -- got to sleep, woke up at 4 a.m., tossed and turned, slept a little more. Finally got out of bed around 8-ish. Made a quick run to the St. Lawrence Market and bought my brother his yearly ration of mustard from Kozlick's. Once they were safely deposited in the trunk of my car, it was off to the CN Tower for the Edgewalk!

For years, I've been joking with family and friends about going to the top of the CN Tower and walking around the outside, just above the 360 Restaurant. Well, it was put-up-or-shut-up time, so I plunked down the cash and donned the flightsuit.

For those who don't know, the Edgewalk is where they take you up to a secure room 351 meters (1151 feet) from the ground and from there you get to walk around the outside of the observation deck/restaurant area.


Well, the folks I went with made the Edgewalk experience really fun -- as did the handlers who took us through the event. It was a really good time, I'd recommend it to anyone. And while it was really tough to push the boundaries of my comfort zone, I'm really glad I did it. I've always had a sort of love/hate relationship with heights that has become more 'hate' than 'love' as I get older. Knowing that I'm capable of facing my fears was well worth the time and money spent -- and you couldn't beat the view of Downtown Toronto!

The following is a video that they gave us of the trip if you'd like to see highlights of what you do during the half-hour experience. If you pay close attention, you can also see all my nervous tics as I'm standing there, debating all the life choices that brought me to this point in time.

On the way out, I picked up the Lego CN Tower kit in order to commemorate my Edgewalk experience. I had planned on doing an animation of the CN Tower last year but couldn't find the model so ended up doing the Arc d'Triomph instead. It actually worked out for the best. Once I got the set home and put together, it was pretty clear that trying to animate that kit would have been an exercise in frustration.

The rest of the day was a blur. I skipped going to the ROM (eh, the Dutch Masters paintings exhibit will still be there when I return for TAAFI's Industry weekend in November) and instead went for some gourmet popcorn and poutine -- Toronto Popcorn Company and Moo Frites in Kensington Market. Then had my yearly Cherry Arctic Rush over at the Dragon City Mall.

Did a little more sightseeing, then went back to the CN Tower that evening. Part of the Edgewalk experience is a full-access ticket to the Tower and Skypod (to be used within the following three days) and I had planned something special for that night.


Last year, I received an extra Toffle when on the Kensington Market tour, so I saved it all year for a special occasion. I ate this remaining Toffle to commemorate the day's experience, slowly savoring the taste of butter tart and chocolate. This time I enjoyed the view of Toronto from the enclosed observation deck and the Skypod. Was still a little difficult to force myself to walk on the observation deck's glass floor, but... little steps and all that. 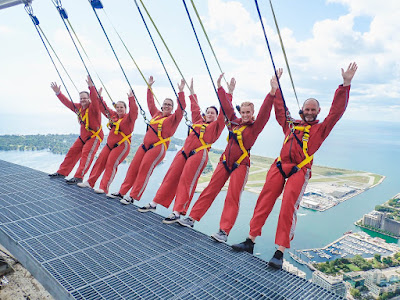 The next morning, it was off to Ottawa for five fun filled days of animation screenings, retrospectives, panels, and parties!