A Year of Animation: Sand Animation

So, once again, I let myself get too busy to work on an animation until the last two weeks of the month. I came up with two great ideas (which I'll probably do later on this year) but they required a bit more work than I had time for -- one being hand drawn and the other stop-motion, but both integrated sound effects and required some precise timing, read that: a much better planned out and detailed dope sheet.

In actuality, it was one part being really busy and one part "eyes bigger than my stomach". So, with time running out, I turned to a tried-and-true hands-on technique: sand animation.

Years ago, I ran an animation class for kids and adults at the East Lansing Rec Center and one of those days covered sand animation. The following is an example animation that I created and showed to the class in order to show them what you could do at a most basic level:

Just a simple morph from one shape to another (yes, the nautical motif that I've been working with over the past couple months is coincidental).

I'm a big fan of Corrie Francis Parks' sand animated films, most notably her award winning film: A Tangled Tale, the first hybrid sand/digital animation film. As such, I've spent a lot of time watching her sand animations over and over, studying her techniques and observing her Making of... video in order to unlock every little tidbit of knowledge from her production process as well as reading her book Fluid Frames: Experimental Animation with Sand, Clay, Paint, and Pixels (if you don't have it, it's available on CRC Press and Amazon.com in both hardback and paperback forms).

Setup for this film was a little different from works I've done in the past and it builds on the techniques I've been exploring over the past few months. After setting up my light table under my DSLR downshooter setup, I taped the usual sheet of tracing paper over the light table to further diffuse the light bulb and reduce the effects of 'hot spots'. However, taking a page from Lynn Dana Wilton's book, this time I also taped a blue lighting gel over the tracing paper in order to give the scene that underwater color. This is a departure from Corrie's setup. As you can see from her Making of... video on Vimeo, Corrie didn't use gels in her animation, preferring to animate on her light table with the set white(ish) background and then handle color in post. 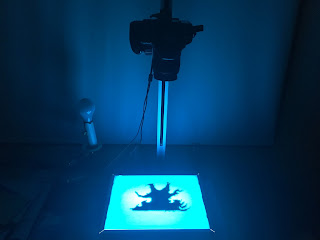 As I wasn't really up to doing a lot of post-production work on these shorts, I stuck with the motto: "the more you can do in pre-production, the less you have to do in post", hence, the lighting gel -- that and I thought it might be something fun to experiment with. One of the things that I miss from college is that "experimental energy" where everything is one big sandbox that you can play in and try things out before gathering all your experiences, successes, and failures together as foundational material when you create your thesis film. More on that train of thought in a later blog post, I think.

As you can see from the animation, it was just a simple morph. Everything was shot on one's and I didn't deviate from the basic timing very much. What I thought was fascinating though was the fluidity of the sand. Yes, yes, I know "fluid frames" and all that. But as I was moving the sand with a small paintbrush, the structure of the sand really lent itself to an ebb and flow much like you would see in fire or water.

The original idea was to make the blob morph into a sea anemone, wave it's tentacles around, and then morph back into a blob. I had even studied my friend's salt water aquarium in order to see how the water current would affect the tentacles. Well, when I started moving the sand around, making the body and adding little buds that would sprout into tentacles, I found myself more fascinated with making the sand flow downward in waves -- seen mostly in the bottom half of the figure.

Not much else to say. I liked the blue gel background, though I did keep the blob of sand in the middle of the screen partially to mask a "hot spot" created by the florescent lights in my light table.

I would like to do two other tests with sand animation, but one where I have a flat plane and I'm simulating waves surging and crashing in the ocean and another where it's a campfire burning in the middle of the screen.