Last June, my brother, himself a new dog owner, brought a delightful student film to my attention entitled: "Omelette". The young lady who produced this film is Madeline Sharifian, a second year student enrolled in the CalArts animation program.1 Well serendipity struck me a week later when on vacation in Toronto, I met a girl at the Toronto Zoo who was drawing a peacock. After asking me to look at her portfolio, she stated that she was interested in becoming an animator and wanted to go to college at CalArts.2 As a result of that conversation, I decided to reach out to Ms. Sharifian and see if she'd be interested in sharing her experiences, to which she graciously agreed. 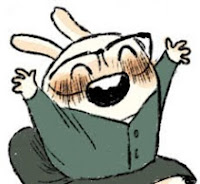 Q: What made you choose animation as a major course of study?
A: I chose animation because of two movies that totally changed my life: 'Spirited Away' and 'Monsters, Inc.' I was pretty young when I saw them, but they completely changed my expectations of animated movies. I was so emotionally moved that I can still remember that car ride home after seeing 'Spirited Away' to this day. The story of Chihiro's personal transformation was so incredible that I think it may have permanently changed my personality (I used to be a very whiny child just like her at the beginning of the movie... so whiny). I didn't learn about CalArts and the character animation program until much much later, but the prospect of trying to make a film was too exciting to ignore!

Q: Your two films "the Mew-sician" and "Omelette" were both produced using 2d hand-drawn techniques, is this your preferred method of animating or do you plan to make the jump to 3d CGI for some of your future student films?
A: I am definitely much more comfortable with 2D animation, whether it's on paper or via a program! I'm not very savvy with computers in general; I didn't learn how to use Photoshop until I went to college. The first time I opened Maya, I felt totally overwhelmed! Now that I'm more familiar with the controls, I've started to really enjoy CG animation class, but I don't think I'll ever become proficient enough with it to make a CG film. Plus I'm horrible at modeling (it's a little embarrassing).

Q: What was your inspiration for Omelette?
A: Well, I love dogs and food. That's really all there is to it! I came up with the basic concept on a hike over the summer and I stuck to it pretty faithfully all year. I wish it had a cool origin story, but it's really just an homage to my foodie family.

Q: On your Vimeo page, you allow people to freely download your film the Mew-sician in HD, SD, and mobile device formats. As students at CalArts retain copyright to their works, what prompted the decision to freely distribute copies of your film as opposed to seeking a way to monetize it or keep it for a DVD compilation of your future works?
A: Can I be honest with you? I had no idea that it was available for download! But it doesn't bother me so much. Also, I would personally find the concept of making money off of my student films very strange! It's definitely not something I think about. I just want to make more films!
﻿﻿﻿﻿

Madeline currently has two blogs that showcase her work. The first is a portfolio of her character designs and storyboards which can be viewed here on blogspot (maddiesharafianportfolio.blogspot.com). The second, also on blogspot (maddiesharafian.blogspot.com), includes preliminary work for "Omelette" as well as a wider array of designs, storyboards, sketches, and artwork that showcase the depth and breadth of Madeline's artistic ability.

Below are Madeline's first and second year films that she produced at CalArts: "The Mew-sician" and "Omelette"

Omelette from Madeline Sharafian on Vimeo.

UPDATE: Now in her third year at CalArts, Maddie has moved her blog over to Tumblr and filled it with lots of cartoons about food and animating, check it out when you get a chance: Maddie's Silly Dillys.I can't wait to see Maddie's next film!

The images and animations used in this blog entry are copyright Madeline Sharafian and used with her permission.

1. Founded in 1961 by Walt Disney through a merger of the the Chouinard Art Institute and the Los Angeles Conservatory of Music, CalArts produced another notable female animator: Nancy Beiman, whose work runs the gamut from Ralph Bakshi and Warner Brothers to Walt Disney Animation Studios (source: LinkedIn).

2. Funny story, three weeks ago, as I was preparing to leave town for a one-week job in Boston, I got an e-mail from out of the blue. Turns out that it was the girl from Toronto asking for a little advice, mentioning that she enjoyed the interviews, and that she's now looking at attending Sheridan College in Toronto. Always happy to hear that the interviews are helping encourage girls who want to be animators! :)
Posted by Charles Wilson at 9:40 AM