This month, there are two animation programs coming to Michigan. The first is a series of animated short films and the second is an independent animated feature film. Both will be shown at the Detroit Film Theatre, the theatre attached to the Detroit Institute of Arts. So if you need to take a break from planning for the Thanksgiving holiday (or someplace to recover from the Thanksgiving holiday), take a couple of hours and support a local venue that is one of the few places we have in Michigan where we can see independent animated film.

Program Description from the DIA/DFT website:
"A cat and mouse carry on a dysfunctional relationship sometime in the future. Two blue collar workers dissect the meaning of “normal” as the world disintegrates around them. A matchbox succumbs – much to its regret – to the allure of a cigarette. A handful of people recall various encounters – triumphant or terrifying, euphoric or everyday – with a universally unforgettable human rite of passage. Nine Nation Animation presents a selection of imaginative and cutting-edge award-winning short films from some of the world’s most renowned festivals, including Cannes, Berlin, Annecy, Clermont-Ferrand and others. Nations represented include Norway, Turkey, France, Ireland, South Africa, Sweden, Belgium, Croatia and England. This bracing, thoughtful, sometimes hilarious program is recommended for persons over 18." 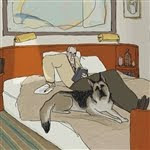 
Description from the DIA/DFT website:
"Based on the celebrated 1956 novel by J.R. Ackerley (We Think the World of You), the deeply touching My Dog Tulip is the first animated film to ever be entirely hand drawn and painted using high-definition paperless computer technology. Though the middle-aged Ackerley had never previously been known for his love of animals, he nevertheless decided to adopt what he described as an “intolerable” 18 month-old German shepherd with whom he quickly fell in love - in spite of her erratic and often inconvenient behavior (sometimes seen in vivid detail), as well as her distinctly canine tastes, attitudes and appetites. Absorbing, visionary and bittersweet, My Dog Tulip comes as a gently breathtaking surprise, enriched by a memorable vocal characterization by the great Christopher Plummer as Tulip’s devoted owner. Featuring Isabella Rosselini and the late Lynn Redgrave."

Film program images and text descriptions are quoted from the DIA/DFT website, are copyright their original owners, and are used here for promotional purposes only.
Posted by Charles Wilson at 12:00 AM