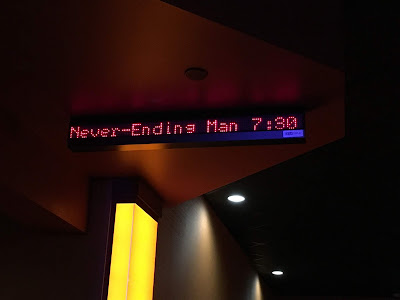 I miss the Waterloo Festival for Animated Cinema. It was the only festival in the world dedicated to feature-length animated films. Being a three hour drive away in Waterloo, Ontario AND held annually the weekend before Thanksgiving, it had become a favored tradition every Fall that I would use to close out the festival season -- and it would allow me to see some animated features that I would never get the chance to see otherwise. Unfortunately, the WFAC did not survive the economic downturn and in 2013, closed their doors forever.

This loss has left a vacant place in my heart as during the five years I attended, some of the best anime I've ever seen was at WFAC: Redline, Genius Party, the first two Evangelion relaunch films, and the Anime Mirai presentations of Pretending not to see and Li'l Spider Girl.

So, during the last two months of the year, I try to find some animation to feed my soul as the cold and dark winter months can wear on the psyche something fierce. Starting in 2014, this usually meant finding something at the Detroit Institute of Arts, usually on my birthday. Last year, my friend Chelsie was in town (she's teaching English in Japan and was home for the holidays) so I took her to see Boy and the World at the Detroit Film Theater -- which, for some odd reason, the DFT is showing again this year on December 31st. Having already seen the visually beautiful yet gut-wrenchingly sad story of Boy and the World (twice), I looked for something... else.

Mamoru Hosoda's Mirai wasn't showing anywhere that I could get to in time as I can't make it to Ann Arbor's State Theater to see a 6:30 p.m. movie after work. No big deal, I wasn't really very interested in seeing it to begin with, but the beautiful draftsmanship and cute story would've made a nice diversion, after all, Hosoda's film Summer Wars was well worth the hours I've spent watching it over and over.

So I continued my search -- which was quickly rewarded by the Internet. As it turns out, GKIDS was showing the documentary film Never-Ending Man: Hayao Miyazaki at the Lansing Mall's Regal theater on Tuesday night at 7:30 p.m. Being only twenty minutes away, I would have more than enough time to get there after work.


The trailer had described this documentary as a man from a (almost) bygone era of hand-drawn animation in Japan struggling to find a place in an industry being taken over by CG animation -- if there even was any place for someone like him anymore.

I walked out of the theater over an hour later with the realization that, having been a professional animator for twenty-one years now, I think I got far, far more out of the film than the rest of the people in the audience.

When I arrived, I was the only person in the theater. Would've loved a "private screening", but it was not to be. Over the course of a half-an-hour, while I tried to ration my five dollar bottle of water (that anyone could get for a buck at a grocery store or a service station), people started to drift in. I could hear them talking about their favorite Miyazaki films and which one was their first. And as the pre-show slideshow displayed the Ghibli Collection of BluRay and DVDs now for sale on the GKIDS website, they counted off what films they had seen from the completed Studio Ghibli library.

And that was par for the course for this documentary. I would look around occasionally, taking note of the blank stares of the people around me. And when the show was over, no one got up and left. As I (and the couple next to me) left the theater, still no one else moved, no one said anything. They just stared at the front of the theater with the 'Fathom Events' logo splashed across the screen. Just out of curiosity, I stood outside the theater door and played with my smartphone for several minutes until people started to drift out. The comments I heard were the same as before the movie: their favorite Miyazaki film, what Ghibli films they had seen, etc.


As I said, this film was more about Miyazaki struggling to figure out if his career was finally over -- if there was anything left for him to do in an industry that is rapidly embracing CGI over hand-drawn animation. And as the septuagenarian used his short film Boro the Caterpillar to explore the current state of CGI animation, and if he himself could adapt to the new paradigm, he was also exploring the idea if he should fade away into the sunset or rally his strength for one last film.

Throughout the doc, they didn't shy away from the many facets of Miyazaki. we saw glimpses of the "Perfectionist Miyazaki" and the "crotchety old man Miyazaki", neither of whom had any difficulty speaking his mind. But we also saw the heartbroken Miyazaki as he counted off friends and colleagues that he wanted to work with again but couldn't because they had died. It was these glimpses into both the working and the personal life of Hayao Miyazaki that took him from the realm of "Miyazaki the legend" and showed us the real humanity of Miyazaki the man.

As an animator, this documentary was a glorious look into the process of how an animation legend creates such visually spectacular and beloved films. I often found myself wishing that they'd held a shot on Miyazaki's storyboards a little longer or spent a couple more minutes looking over his shoulder as he drew keyframes for Boro the Caterpilar by hand -- easily outclassing the 3d animators who were tasked with the monumental job of translating Miyazaki's vision into a 3d modeling and animation program (animators will be amused at the scenes where he repeatedly points out the problems with the caterpillar's motion and sends the poor 3d animators back to the "drawing board" to try again). It was this facet of the film that I think the rest of the audience missed. Not that it was a step-by-step look into the Studio Ghibli production pipeline, but there were subtle little nuances in his process that I'd like to see again.

My only complaint about the documentary is that they didn't show the Boro the Caterpillar short at the end of the show. I understand that 'Boro' is being saved for screening at the Studio Ghibli museum, but since we saw this short film in varying states of production during the documentary, that would have been a nice payoff. No, the big payoff came right before the doc started when they announced that Miyazaki would be working on another feature-length animated film.

Later on in the show, he stated that he'd rather die working on a film than die being bored at home. Both Osamu Tezuka and Satoshi Kon died before finishing their last projects. Let's hope and pray that Miyazaki doesn't suffer such a tragic fate. 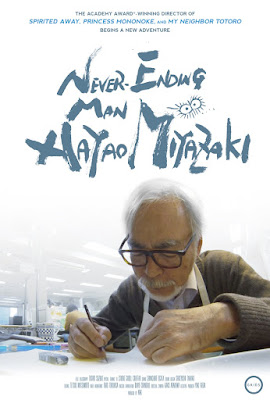 1. Theater photo copyright Charles Wilson
2. All other photos and videos copyright GKIDS/Studio Ghibli/NHK and used with permission.
Posted by Charles Wilson at 12:00 AM